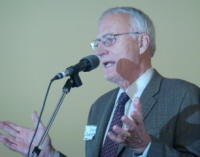 More than two hundred Minnesotans – from party leaders, to legislators, to mayors, to city council members, to interested citizens – rallied in support of ranked choice voting at a fundraising event held for FairVote Minnesota in Minneapolis Tuesday evening.

Ranked choice voting (aka instant runoff voting, or IRV) passed at the polls in 2006 in the City of Minneapolis by a 65 to 35 percent margin, and will be instituted in Minneapolis’ 2009 November elections, joining seven other jurisdictions across the country, including San Francisco and Cambridge, Massachusetts.

The instant runoff voting system allows voters to rank candidates on the ballot according to their 1st choice, 2nd choice, and 3rd choice etc. FairVote Minnesota explains how the votes are then tallied:

At the event, former Independence Party gubernatorial nominee Peter Hutchinson introduced several political leaders who attested to their support for the voting system, which FairVote is trying to get instituted in cities such as St. Paul and Duluth, as well as ultimate passage at the State Capitol in the coming years.

The Minnesota Supreme Court, however, will hear an appeal by Minnesota Voters Alliance on May 13th regarding the constitutionality of the measure. The group lost their lawsuit at the trial level against the City of Minneapolis and FairVote Minnesota, but maintains:

“IRV is undemocratic because it counts the secondary choices of some voters while counting only the first choice votes of others. It eliminates the primaries which play a vital role in the electoral process; It creates false majorities, suppresses minority viewpoints and its structure makes it susceptible to strategic manipulation.”

Former U.S. Senator David Durenberger followed Melendez, and jokingly asked for more time to speak than the two minutes allotted because, he said, “I think I’m the only Republican here.” Durenberger lamented at how the GOP used to be a “Big umbrella party…the umbrella kept getting bigger all the time. And someone came along and shrunk that umbrella.” The Senator then endorsed ranked choice voting:

“On behalf of my kids, my grandkids, the people who voted for Barack Obama who said, ‘It’s time for a change in this country. Let’s take back the governance of all our institutions, including our political institutions.’ This is the only way I know to do it on the political side.”

Smart Politics asked Tinklenberg what he thought of ranked choice voting and how it would have impacted his 2008 race against Republican Michele Bachmann if it had been the law of the land. In that race, Independence Party candidate Bob Anderson received 10 percent of the vote, with Bachmann winning with a plurality of 46.4 percent over Tinklenberg’s 43.4 percent. Many DFLers believe those Anderson votes would have gone to Tinklenberg had he not been on the ballot, although SurveyUSA polling conducted just prior to the election shows Anderson’s support was split among partisans.

While the former State Transportation Commissioner did not explicitly endorse the ranked choice voting system outright, he did say “Something needs to be done.” Tinklenberg stated he believed Anderson’s candidacy, “Didn’t contribute to the campaign of ideas” in the ’08 race. He also attributed the votes Anderson received as a result of the general dissatisfaction among the electorate due to the length of the campaign as well as the independent streak that runs through the district. He interpreted votes for Anderson as a portion of the electorate saying, “A pox on all your houses.”

I then asked Tinklenberg what he thought of the theory advanced at Smart Politics regarding the possibility his candidacy suffered not so much in the final days of the campaign from protest votes for Anderson but from a backlash by the 6th District against the national media’s vocal criticism of Congresswoman Bachmann. “There’s something to that,” he said. The former Mayor of Blaine went on to say he was actually feeling much more comfortable with the direction of his campaign before Bachmann’s infamous interview on Chris Matthews’ Hardball program. In the end, though, Tinklenberg admitted, “We needed to earn the votes.”

FairVote hopes those votes will eventually be cast and counted in an entirely different way in Minnesota’s federal, state, and local elections in the coming years.