(This report is the second installment in Smart Politics’ ‘Pathway to the White House’ Series. The first report analyzed from what state presidents come).

A new Minnesota Poll released this week finds a majority of Gopher State residents opposed to a presidential bid by Governor Tim Pawlenty and a plurality of 43 percent saying there is ‘no chance’ they would cast their vote for him.

The Star Tribune finding that there is barely lukewarm support in Pawlenty’s home state for him to seek the highest office in the land, comes as Pawlenty has been running a distant fifth or sixth in (very) early national GOP horserace polls behind more well-known potential candidates such as Mitt Romney, Sarah Palin, Mike Huckabee, and Newt Gingrich.

While Pawlenty’s support would likely grow nationwide once he launched an official candidacy (he launches his Freedom First PAC on Thursday), the new Minnesota Poll raises the question – could Pawlenty win the presidency without carrying his home state of Minnesota?

While it is still 2.5 years out from even the presidential primaries, the question is not a far-fetched one to consider from one perspective – a mid-September Rasmussen poll found half of Minnesotans to believe Pawlenty will win the GOP nomination should he run for President.

As analyzed by Smart Politics last week, no president has come from Minnesota to date, and only one has come from the Upper Midwest region (Herbert Hoover, from Iowa, in 1928).

Still, history has demonstrated that it is (nearly) a necessary though not a sufficient condition that presidential nominees must carry their home state if they wish to win the presidency.

A Smart Politics analysis of the 56 presidential elections since 1789 found that all but two presidents carried their home state en route to victory. 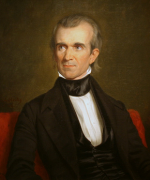 The first president to win the White House without his home state was Democrat James Polk in 1844. Polk lost Tennessee by just 123 votes to Kentucky’s Henry Clay out of nearly 120,000 cast, but still defeated Clay 170-105 in the Electoral College vote.

As such, it does not appear that Pawlenty could have much success in 2012 if he fails to at least enlist Minnesotans among his supporters for such a bid.