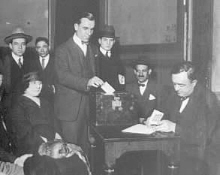 Over the past few decades, Minnesota is known to have notched many of the highest voter turnout rates in the nation, flirting with 80 percent in each of the last two presidential election cycles.

In fact, Minnesotans’ strong sense of civic duty (and, of course, the state’s inviting voter registration laws) is such that the state’s turnout rate in midterm elections has been on par with the national rate in presidential election years.

Still, only about three in five eligible Gopher State residents vote during midterm cycles, with the high water mark since 1950 being 64.9 percent, set in 2002 when Governor Tim Pawlenty won his first term in that year’s top of the ticket race.

However, a review of public opinion polls released over the last several weeks on Minnesota’s 2010 gubernatorial contest finds that survey organizations are releasing data suggesting a much higher projected turnout.

For example, in the new Star Tribune poll released on Sunday, 1,227 Minnesota adults were interviewed via landlines and cell phones, of which 949 were deemed to be likely voters, or 77.3 percent.

The Gopher State has reached a 77.3 percent turnout rate just four times since 1950 – all, of course, in presidential election years.

But the Star Tribune poll is not alone.

SurveyUSA’s four polls of likely voters in May, June, August, and September all yielded a percentage of likely voters of adults interviewed in excess of the state’s midterm record of 64.9 percent (65.3, 71.9, 71.7, and 65.6 percent respectively).

(Note: Rasmussen has polled Minnesota’s gubernatorial race five times this year but does not publicly indicate how many adults are interviewed to yield the number of likely voters surveyed).

But the data gets a little more complicated than this.

And that is because the raw number of individuals interviewed in these surveys before likely voter determinations are made (“adults”) does not filter out residents ineligible to vote, such as felons, non-citizen legal residents, and illegal aliens.

Therefore, when SurveyUSA interviewed 1,000 adults in mid-September, the 656 likely voters came from a “voting age population” (VAP) base of adults generally, not the “voting eligible population” (VEP) base from which voter turnout rates are determined. (VAP is the statistic commonly used for survey organizations for sampling).

In short, the polling data suggests an even greater turnout.

One explanation for this overly optimistic read on the electorate is that those who are most interested in politics (and thus likely to vote) are those who are more willing to agree to be interviewed about politics in the first instance, thus elevating the percentage of likely voters in the sample. (Note: when a survey organization interviews, say 1,000 adults, they may need to call up to twice as many households or more to reach that number, as many adults are not home or refuse to be interviewed etc.).

In the end, the only real question for journalists and poll-watchers who examine these horserace numbers is whether or not any key demographic is being ‘oversampled’ as likely voter numbers are inflated to a level which clearly are not going to be reached on Election Day.

In other words, if a survey organization deems 7 out of 10 Minnesotans interviewed are likely to vote, but only 6 in 10 do so in the midterm, is that extra 1 in 10 ‘likely voter’ fairly reflecting all meaningful demographics that might impact vote choice (e.g. age, race, gender, partisan ID, ideology, some of which are already being weighted)?

It appears so, at least for SurveyUSA, upon further reflection of their 2006 gubernatorial race polling.

In SurveyUSA’s final poll of that cycle, conducted November 3-5, 1,000 Minnesota adults were interviewed, of which 710 were deemed to be likely voters (71.0 percent).

Still, SurveyUSA nailed the race, finding a 45 to 45 percent deadlock between Pawlenty and DFL nominee Mike Hatch. Pawlenty won by a 46 to 45 percent margin.