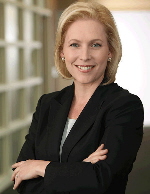 While Massachusetts Republican Scott Brown continues to have far and away the most cash on hand of the two dozen U.S. Senate incumbents running for reelection in 2012, he did not enjoy the largest boost from the end of 2010 through the first quarter of 2011.

According to fundraising data submitted by the candidates to the FEC last month, that title belongs to Democratic New York Senator Kirsten Gillibrand.

Gillibrand, who had only the 17th most cash on hand at the end of 2010 among the two dozen incumbents lodging reelection bids in 2012, is now ranked 5th after netting $2.76 million in the first quarter of 2011 for a total cash on hand tally of $3.37 million through March.

Senator Brown still leads all of his 2012 colleagues with $8.34 million cash on hand and remains one of the few Democratic targets in next year’s election.

Brown netted another $1.16 million cash on hand in Q1 2011 which was the fifth highest amount among those Senators who will be on the ballot next year – behind Gillibrand, Tennessee Republican Bob Corker (+ $1.78 million), Florida Democrat Bill Nelson (+ $1.48 million), and New Jersey Democrat Bob Menendez (+ $1.39 million).

Nelson trails Brown by $3.77 million in second place for total cash on hand among those incumbents up for election in 2012 with a total of $4.56 million followed by California Democrat Dianne Feinstein ($4.30 million), Menendez ($3.82 million), and Gillibrand ($3.37 million).

The average amount of cash on hand increased nearly $1 million across the two dozen incumbents from the end of December ($1.58 million) to the end of March ($2.52 million).

Data for the second quarter of 2011 will be available for all Senators by mid-July.