Former House Speaker receives more than one-fifth of the speaking time, edging Romney and Paul and doubling up on Perry 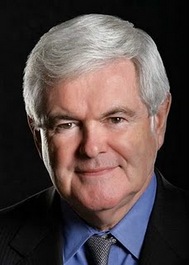 Unlike the last Iowa Republican presidential debate from five days ago, Thursday’s gathering of the GOP field gave all three Hawkeye State GOP frontrunners substantial time to communicate their message to Iowans and the nation.

Newt Gingrich, Mitt Romney, and Ron Paul have all polled at or very near the top of an Iowa survey over the last week, and clocked in first, second, and third respectively for the most speaking time at the FOX News moderated event in Sioux City.

Gingrich, enduring a barrage of attacks from nearly all quarters, received slightly more than one-fifth of candidate face time at 14 minutes and 45 seconds (20.2 percent) followed by Mitt Romney at 13 minutes and 3 seconds (17.9 percent).

Congressman Paul, meanwhile, was able to increase his speaking time by over three and a half minutes from last weekend’s debate in Des Moines (7:59), tallying a record best 11 minutes and 40 seconds for the Texan (16.0 percent), despite the field sharing the stage with an additional candidate in former Utah Governor Jon Huntsman.

Paul’s rise in speaking time was due to both heightened moderator interest in the Texas U.S. Representative as well as required rebuttal time after being attacked, particularly by Michele Bachmann on Iran.

Even though Perry notched less than half of the face time recorded by Gingrich, the Texas governor was able to make his mark on the debate in a more effective way than most “forgotten candidates” this campaign cycle, due in part to a string of self-deprecating comments and a timely, if somewhat forced, Tim Tebow reference (an overture to Christian fundamentalist viewers).

The Sioux City gathering was just the second time Gingrich has received the most speaking time at a debate thus far, with the other occasion being the Washington, D.C. debate last month.

Romney has recorded the most face time in six debates since September (Florida #2, New Hampshire #2, Nevada, Michigan, South Carolina #2, Iowa #2) and the second most in the remaining four (California, Florida #1, D.C., Iowa #3).

Rick Santorum is the only candidate to never have received higher than the fourth most speaking time at a debate.

Although he received less time than Gingrich on Thursday evening, Mitt Romney continues to enjoy a significant lead over the rest of the GOP field in speaking to the American public across the last 10 debates since Rick Perry joined the proceedings.

Jon Huntsman has spoken for one hour during the eight debates in which he has participated since September.

Total and Average Speaking Time Per Debate by Candidate Since September