The nine week gap between the primary and runoff elections is the longest for any U.S. Senate run-off in Texas history 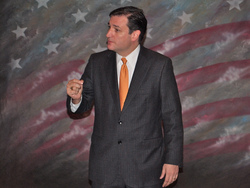 Although both Democrats and Republicans will have runoff elections on Tuesday to determine who will square off in the state’s U.S. Senate race this November, it is the GOP contest that is getting all the attention.

Former Texas Solicitor General and Tea Party-backed candidate Ted Cruz first made waves at the end of May when he forced a runoff by helping to hold Lieutenant Governor and establishment candidate David Dewhurst to 44.6 percent of the vote.

And now, in the closing days before Tuesday’s runoff, a survey by Public Policy Polling shows Cruz now up on Dewhurst by a 10-point margin, 52 to 42 percent.

It is not unusual for the second place finisher in Texas U.S. Senate primaries to come back and win the runoff.

In fact, it has happened in eight out of the 14 such runoff contests for Democrats and Republicans dating back to the direct election of U.S. Senators nearly a century ago.

But what is unusual, and what appears to have helped sustain Cruz’s momentum coming out of the May primary, is the length of time between the primary and the runoff.

A Smart Politics review of Texas U.S. Senate election data finds that the gap between the 2012 primary and runoff elections is twice as long as the historical average across the 14 previous instances of run-offs for the nation’s upper legislative chamber.

Ted Cruz enjoyed a nine-week gap between the May 29th primary and the July 31st runoff to give him the time (and much free publicity in the media) to try to convince Republican voters in the Lone Star State that he was a viable and the preferred candidate to send to Washington, at a time when his opponent was trouncing him in the fundraising war.

Through mid-July, Dewhurst had raised more than $24.5 million compared to just $9 million for Cruz.

The longest previous gap between the two elections during cycles in which Texas U.S. Senate contests went to a runoff was just five weeks – most recently in 1988, 1994, and 2006.

Overall, the 63-day window between the primary and the runoff in 2012 is twice as long as the 31.5-day average over the last 14 cycles in which the race was forced into a runoff.

Of course, turnout is always a big question mark in elections such as this – will voters be motivated to go to the polls for the second time in nine weeks, and, if so, to back which candidate?

Turnout has historically declined 34 percent in Texas U.S. Senate runoff races from the primary over the last century, including a 45 percent drop in the five such contests since the 1990s.

On the Democratic side, primary plurality winner and former state representative Paul Sadler will square off against second place finisher Grady Yarbrough.