Peterson will crack the Top 10 list for the oldest U.S. Representatives in Minnesota history by the end of this term; only five others have served longer in the chamber 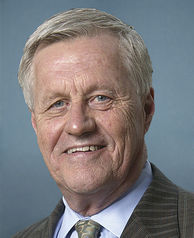 That speculation was largely based on what observers erroneously viewed to be lackluster fundraising by Peterson over the last year, although Smart Politics wrote reports in October 2013 and February documenting how Peterson’s receipts were actually in line with or exceeding his fundraising numbers at this stage of the campaign in previous cycles, and thus did not suggest retirement was in the DFLer’s near future.

With Peterson now officially in the race to win a 13th term, Smart Politics shines a light on some other little-known facts from the congressman’s file:

If reelected this November, Peterson would become just the sixth Minnesota U.S. House member to win a 13th term in state history.

The only Minnesotans to reach the 13-term mark are:

Andresen died in office, Sabo and Blatnik retired, and Knutson and Oberstar were defeated at the ballot box in 1948 and 2010 respectively as they sought to continue their tenure on Capitol Hill.

If reelected in 2014, Peterson will also climb the list of the oldest U.S. Representatives in Minnesota history.

At the age of 69 years, 8 months, and 17 days through Monday, Peterson is currently the 11th oldest U.S. Representative to serve the state. (Fellow DFLer Rick Nolan currently sits at #8 at 70 years, 3 months).

Farmer-Laborite Richard Thompson Buckler is the oldest Minnesotan to serve in the chamber, finishing his fourth and final term in January 1943 at 77 years, 2 months, 7 days.

Peterson is the fifth Minnesota U.S. Representative born in the state of North Dakota of the 134 men and women to serve in the office in state history.

That is tied with Pennsylvania for the fourth most of any state behind Minnesota (53 members), Iowa (six), and Maine (six).

Peterson was born in Fargo and knocked another Fargo-born congressman out of office during the Election of 1990 (Republican Arlan Stangeland, 1977-1991).