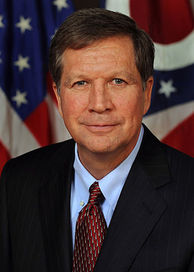 With high-profile, competitive Midwestern gubernatorial races expected in Illinois, Michigan, and Wisconsin, the race for governor in Ohio has not quite been on the front burner of the national media’s 2014 Midwestern election coverage.

To be sure, 2014 is not exactly lining up for a Democratic rebound from the 2010 midterms with Barack Obama’s job approval rating languishing in the low 40s.

Still, Ohio Democrats are optimistic that they have put forth a bona fide challenger against Kasich in Cuyahoga County Executive Ed FitzGerald.

That said, just one public poll of the FitzGerald-Kasich matchup (partisan-backed or otherwise) has been released so far this year (by Quinnipiac in mid-February, with Kasich up 43 to 38 among registered voters).

But if Obama continues to record lackluster approval numbers, what kind of chance does FitzGerald have to overcome potential Democratic malaise and upset Kasich this November?

Unlike most Midwestern states, Ohioans have elected a fair number of Democratic governors over the decades when a Democrat sat in the White House.

Ohio Democrats have won eight of 20 such contests since 1900, or 40 percent of the time – not great numbers, but good for third best in the 12-state Midwest region.

However, the last time Ohio Democrats kept or got back the keys to the gubernatorial mansion with a Democrat in the White House was 62 years ago in 1952.

· 1916: Former governor and future Democratic presidential nominee James Cox won the seat with 48.4 percent of the vote, knocking Frank Willis out of office. Willis had done the same to Cox in 1914.

· 1918: Cox was reelected with 50.6 percent in a third consecutive battle against Willis.

· 1948: Lausche defeated Republican incumbent Thomas Herbert (who upset Lausche in 1946) with 53.7 percent of the vote.

· 1952: Lausche had his strongest ever performance winning his fourth term with 55.9 percent over future Cincinnati Mayor Charles Taft II.

Meanwhile, Democratic gubernatorial nominees have fared much better when a Republican serves in the White House, winning 15 of 22 contests since 1900, or 68.2 percent of the time.

That is the best mark in the Midwest, with Missouri next at 56.3 percent and Kansas at 44.0 percent.

Ohio thus has a +28.2-point differential when Democratic gubernatorial nominees run against the backdrop of a Republican presidency (68.2 percent) versus a Democratic one (40.0 percent).

Since 1900, Ohio Democratic candidates for governor have averaged 50.2 percent of the vote when a Republican president was in office and 46.5 percent with a Democratic president.

The odds of Democrats winning back the governorship in 2014 were dealt a minor hit earlier this year when a ruling came down against would-be Libertarian nominee Charlie Earl.

Earl, a former GOP State Representative in the early 1980s, was taken off the ballot by Republican Secretary of State Jon Husted because the Libertarian Party did not disclose that signatures were being gathered by paid professionals (rather than by candidate or party volunteers).

Earl has appealed the ruling to federal court.