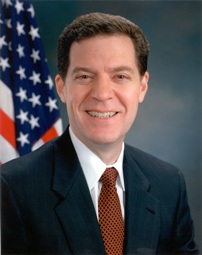 The U.S. Senate’s razor-thin vote last week to confirm Sam Brownback as the U.S. Ambassador at-large for international religious freedom means the controversial two-term Kansas governor will shortly be resigning from his seat approximately a year before the end of his term.

Brownback will be the fifth Kansas governor to resign since statehood joining:

Once Brownback officially takes on his new role in the Trump administration, Kansas will have seen its last two elected governors resign. [Lieutenant Governor Mark Parkinson served in between Sebelius and Brownback, but was never elected to the office].

This has been rather unusual in the annals of U.S. politics. In fact, it has occurred just nine other times since the turn of the 20th Century:

Overall, more than 105 elected governors have resigned from office since 1900 – with nearly half of them doing so to take a seat in the U.S. Senate.

All told, 50 have done so since the turn of the 19th Century, including four currently serving in the chamber: the aforementioned Carper of Delaware (2001), North Dakota Republican John Hoeven (2010), West Virginia Democrat Joe Manchin (2010), and New Hampshire Democrat Maggie Hassan (2017) who exited her post two days before the end of her term.

Becoming a U.S. Senator is by far the most common destination for the men and women who resign from their governorship.

Three elected governors resigned due to ill health: Democrats John Little of Arkansas in 1907, Joseph Toole of Montana in 1908, and Ella Grasso of Connecticut in 1980.

Six others resigned for various reasons, including one – Republican Harold Stassen of Minnesota – to serve in the Navy during World War II. Stassen resigned a few months into his third term in 1943 and eventually achieved the rank of captain and was highly decorated for his service including being awarded the Legion of Merit.

Only seven states have not had an elected governor exit office via resignation since 1900: Hawaii, Maryland, Missouri, Mississippi, North Carolina, Virginia, and Washington.

In addition to Brownback, Huntsman, and Cellucci listed above, other governors who resigned for an ambassadorship include Democrat Raul Castro of Arizona in 1977 (Argentina), Democrat Patrick Lucey of Wisconsin in 1977 (Mexico), Democrat Richard Kneip of South Dakota in 1978 (Singapore), Republican Nikki Haley of South Carolina in 2017 (United Nations), and Republican Terry Branstad of Iowa in 2017 (China).