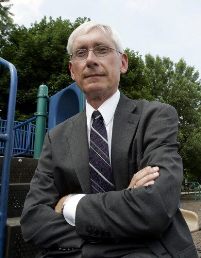 A second poll has been released within a week that shows Wisconsin Superintendent of Public Instruction Tony Evers with a healthy lead against two-term GOP Governor Scott Walker – 48 to 41 percent among registered voters.

The Emerson College survey also found Evers to be the overwhelming favorite to win the crowded Democratic primary.

However, while Evers’ advantage in the primary has hovered around the 20-point mark, he has not yet coalesced the support of even one-third of potential Democratic primary voters – topping out thus far at approximately 30 percent.

And so, with two weeks until Primary Day, the August 14th nomination contest may not provide the kind of drama that was expected earlier in the cycle, but there are nonetheless several state records that will be set, tied, or come close to being broken.

The 10 Democratic candidates on the 2018 primary ballot marks both party and state records in a Wisconsin gubernatorial race.

[Note: While two candidates have withdrawn from the race – state Assemblyman Dana Wachs and businessman Andy Gronik – their names will still appear on the ballot].

Prior to 2018, the largest number of candidates in a Badger State gubernatorial primary was six – a mark reached three times:

After including Scott Walker and his GOP challenger, businessman Robert Meyer, the 2018 cycle also shatters the state record for the most cumulative major party candidates for governor on the state primary ballot with 12.

That breaks the previous mark of eight Democrats and Republicans who ran for their party’s nomination in the state’s second primary in 1914. Seven major party candidates ran in 1920, 1946, 1986, and 2012.

Even when including Progressives – who essentially had major party status in the 1930s and 1940s – the three parties topped out at 11 candidates for governor on the primary ballot twice: in 1942 (five Progressives, four Democrats, two Republicans) and 1946 (five Republicans, four Progressives, two Democrats).

Lowest Support for a Democratic Nominee?

Unless Evers’ campaign endures a significant setback during the next fortnight, it is unlikely he will go down in the history books with the lowest support for a Democratic gubernatorial nominee in state history – although he may end up second on that list.

Just two other Democratic nominees have failed to win 40 percent of the primary vote across the 42 previous primaries conducted for the office since 1912.

Three other Democrats were nominated with pluralities over the decades: Madison Mayor Albert Schmedeman in 1932 (44.0 percent), Lieutenant Governor Patrick Lucey in 1966 (45.2 percent), and former state legislator and DNR Secretary Tony Earl in 1982 (45.9 percent).

As for the Republicans, with his expected landslide renomination victory, Governor Walker will tie a state record with his fourth gubernatorial primary win.

Walker will join GOPer Tommy Thompson (1986, 1990, 1994, 1998) as the only major party candidates in the state to win four nominations for governor in the direct primary era.

Prior to the adoption of direct primaries in 1912, the only major party candidate to win four gubernatorial nominations was Democratic newspaperman and Milwaukee Mayor George Peck (1890, 1892, 1894, 1904).

Walker is unlikely to break his own state record for the strongest primary performance by a sitting Wisconsin governor in a contested primary.

This cycle, Walker is being challenged by businessman Robert Meyer of Sun Prairie.