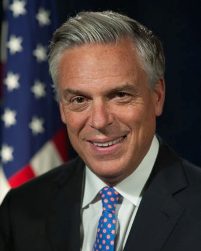 Word that Republican Jon Huntsman is considering a return to his former job as governor of Utah adds yet another big name to the list of rumored GOP candidates who may vie for their party’s nomination to the state’s highest elected office.

[Though few are expected to get in the race should popular Governor Gary Herbert unexpectedly reverse course and run for a third full term].

If Huntsman does run and win, he would become the first former Utah governor to return to the office in state history.

Huntsman exited the governorship in August 2009 after being confirmed to serve as U.S. Ambassador to China under Barack Obama.

Even though not every Utah governor was able to leave office on their own terms, none later sought a return to their old job:

A few former governors have sought other elected office, including Huntsman who made a bid for the GOP presidential nomination in 2012. Others include:

Lee was also the Conservative Party nominee for president in 1960.

Unlike Huntsman, most of these aforementioned governors were term-limited or lost their gubernatorial seat in between their two (or more) stints in office.