Sarah Palin is contemplating a bid that could add her name to a short list in the annals of U.S. elections 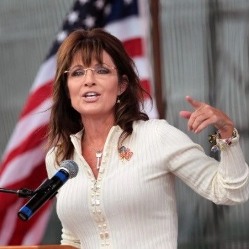 Following the death of long-serving Alaska Republican U.S. Representative Don Young last week, several notable names are readying their campaigns for the special primary election to be held on June 11th from which the top four candidates will move on to the August special.

Perhaps the biggest name who has floated a potential bid is former governor and 2008 GOP vice-presidential nominee Sarah Palin.

Palin last served in elected office in July 2009 when she resigned during the third year of her governorship.

If Palin decides to run and is elected she would become just the 10th ex- or sitting governor – and only the fifth since the 1900s – to win election to the U.S. House from a state with just one at-large seat.

More than half of the states – 30 in total – have been represented by a lone at-large U.S. Representative at some point during their history; some states for just a few years and some for several decades.

The most recent at-large U.S. Representative to have previously served as governor was South Dakota Republican Bill Janklow.

Three other governors went on to win at-large U.S. House elections during the 20th Century:

Five ex- or sitting governors were elected to at-large U.S. House seats during the 19th Century:

While Palin may not be as popular in Alaska as she was when she won the governorship with a 48.3 percent plurality after knocking out incumbent Frank Murkowski in the 2006 GOP primary, it is difficult to imagine that she would not muster enough support to land in the top four in the June primary to move on to the August ballot.