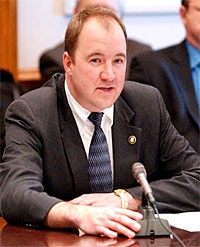 No news was good news for the four Minnesota state legislative incumbents challenged in Tuesday’s primary—each of whom enjoyed a double-digit victory to move on to November’s general election.

The big story was in District 12, where GOP incumbent Paul Koering survived a high-profile race in beating city councilman Kevin Goedker 55 to 45 percent. Earlier in the term Koering was the only republican to join Senate DFL-ers in an attempt to prevent a floor vote on a ban of gay marriage via constitutional amendment. A few days later Koering acknowledged that he himself was gay—becoming the only openly gay member of the GOP delegation.