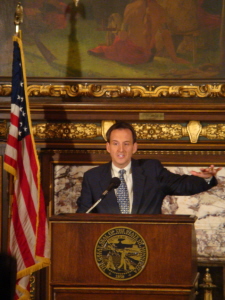 One of the frequent refrains heard throughout the DFL leadership this session has been a criticism of Governor Tim Pawlenty’s budget as failing to be structurally balanced beyond the 2010-2011 fiscal years, and a disapproval of the Governor’s use of one-term solutions, such as tobacco bonds, to facilitate the State’s constitutional requirements to balance the budget by May 18th.

On MPR Wednesday morning, Minnesota House Speaker Margaret Anderson Kelliher said four years out, in FY 2012-2013, the budget deficit is projected to be at over $6 billion:

“There is an underlying problem in the structure of our budget…And the fact of the matter is the Governor’s comfortable kicking the can down the road and passing it along to another day.”

In a press release on Tuesday afternoon, the Senate DFL caucus accused Pawlenty of “Using federal funds to hide the real problem,” and made a vague reference to the Governor in its warning that, “This is no time for political aspirations to be ahead of the needs of the public.” (emphasis added)

The DFL has also made frequent reference for the need to have “All the options on the table”; Speaker Anderson Kelliher chooses to use the analogy of the legislature needing, “All the trays in the toolbox,” and calls Pawlenty’s vow of no tax increases, “Sabre rattling.”

These ‘options’ and ‘tools’ that the DFL wants to use, but does not want to always address by name are, of course, tax increases on Minnesotans. The Speaker prefers the term, “Fairer revenue raise.”

All the while the Governor remains a model of consistency, pledging again on Tuesday that he would oppose any tax increases for Minnesotans and Minnesota businesses.

Even party loyalist GOP House Minority Leader Marty Seifert, however, has concerns about the Governor’s budget proposal. On MPR Wednesday morning he stated:

“I don’t disagree with the Speaker that the securitization of the tobacco bonds are a revenue source. The one thing we have to be careful about is it’s a one-time pot and if the Governor’s budget structurally changes 30 percent of spending and on a one-time basis 70 percent – I’m concerned about that. I’m just going to be honest with you about that. I don’t mean to criticize him – he does have a solution out there, and I want to thank him for the solution…(but) It’s got to be a little heavier on the long-term structure because we’ll be back in the soup again in 2011…We have to have more structural reforms.”

At Tuesday’s media availability, when asked whether or not he would be able to solve the budget imbalance for not only this biennium, but also the 2012-13 biennium, without increasing the revenue that comes into the State, Pawlenty elected to punt for one of the few times all morning:

“We’re going to have a balanced budget that meets the constitutional requirements of the State of Minnesota.”

The lines connecting the dots here are short and straight.

Pawlenty’s non-answer answer regarding the 2012-13 budget, taken together with the Senate DFL’s reference to Pawlenty’s ‘political aspirations’ fuels the DFL’s speculation that:

1) The Governor is purposefully leaving the budget unstructured.

2) The Governor is leaving the budget unstructured, because he knows the only way to resolve the $6 billion 2012-13 deficit is to institute tax increases today.

3) The Governor is willing to “kick the can down the road” because he does not want to break his “no tax increase” pledge.

4) The Governor does not want to deviate from this “no tax increase” mantra because he wants to leave open the possibility of running for President in 2012.

5) Should the Governor sign off on tax increases (and focus on what the DFL believes to be the long-term financial health of the State), his potential Republican presidential primary rivals could use any such tax hike as a weapon against him in the presidential primaries. As of today, he could enter the 2012 GOP field with fairly clean, conservative hands.

As such, the Governor is continuing to hammer away at non-tax raising solutions to make the budget as structurally sound as possible – such as through more spending cuts and governmental pay freezes (including the politically shrewd move of reducing his own salary as Governor).

Of course, the Governor could take an arrow out of the DFL’s quiver by announcing his intention to run for Governor in 2010 – if that is indeed his intention. The announcement of his 2010 plans are expected sometime in the next 10 months, though the odds are not high that the Governor will do so until after this legislative session is completed.