With the DFL winning a string of 9 consecutive presidential elections, 4 out of 5 U.S. Senate contests (counting Al Franken), and netting 35 state House and 11 state Senate seats since 2002, Minnesota has been frequently characterized as an increasingly “Democratic-leaning” state.

The outputs of the DFL’s electoral success are quite measurable, and are no more evident than in the 2008 U.S. House elections when, although the GOP did not lose any seats, Republican candidates received the lowest level of voter support across the state since 1934 (at 38.1 percent across all 8 Congressional districts). A bad roll of the dice during the next redistricting process could lead to the loss of one of the GOP’s three seats.

But has this Democratic momentum translated into legislating for more liberal policies from the Minnesota U.S. House delegation in D.C.?

· During the first 8 years after the Republican Revolution until redistricting, 1995-2002, the average conservative rating across the state delegation was 36.2 percent – meaning Minnesota’s representatives (in sum) were more conservative than just over a third of U.S. House members.

· During the last six years after redistricting, 2003-2008, the conservative voting record of the Minnesota delegation increased 28 percent – at 46.3.

However, two other factors are in play.

First, the Republican delegation itself is voting more conservatively. From 1995 through 2002, the average composite conservative rating of Minnesota GOP House members was 65.9 percent. From 2003 through 2008, that rating increased to 73.1 percent.

From 1995 through 2002, the GOP delegation (Jim Ramstad, Gil Gutknecht, and John Kline at the tail end) had a collective conservative rating of more than 70 percent in only one year (1999). However, from 2003 through 2008, members of this delegation (which included Ramstad, Gutknecht, Kline, Mark Kennedy, and Michele Bachmann) had a conservative rating above 74 percent in 4 of the 6 years – and flirted with 80 percent during 2007 and 2008, even with the ever-moderate Ramstad still in office. 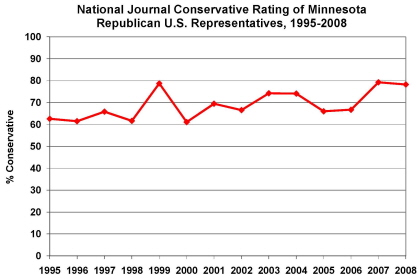 The second factor contributing to this more conservative tilt is that the Minnesota DFL delegation has not voted less conservatively in recent years. It’s holding flat – despite the general DFL dominance in statewide and district contests held after the 2002 elections (with Governor Tim Pawlenty’s 2006 victory the notable exception). 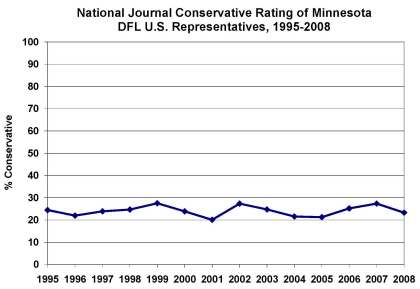 Note: National Journal’s rankings reflect normalized scores between 0 through 100. As such, what this data reveals is that, based on the ‘key votes’ identified each year by the publication, Minnesota’s congressional delegation was voting more conservatively in recent years as compared to the U.S. House overall (which may be, but is not necessarily, an indication of increased conservativeness among its members per se).