In a town hall forum at the University of Minnesota on Friday evening, two of the most recognizable Republican members of the U.S. House of Representatives gave spirited talks about the state of and solutions to American economic and fiscal policy.

Smart Politics was on the scene and noted which of those key moments in Paul’s town hall address that engendered widespread applause from the audience also inspired applause from Congresswoman Bachmann, and which did not.

In her opening remarks the Congresswoman tellingly grouped herself into the same camp as Paul, while playfully thanking the University of Minnesota for providing the forum for the event:

“This is such a great institution. They would invite Michael Moore, and now they invite Ron Paul and Michele Bachmann. Now that’s diversity!”

Bachmann focused her 15-minute speech on legislation authored by Paul in the House to audit the Federal Reserve. The Federal Reserve Transparency Act lists Bachmann as a co-sponsor, and the Congresswoman’s call that the Federal Reserve, “Should be about protecting the soundness of our dollar, not inflating it, and not destroying it,” drew chants of “End the Fed,” in the crowd.

In her introduction of Representative Paul, Bachmann lauded the former GOP presidential candidate, who is now joined by Bachmann in his “Thursday Liberty Luncheon” in D.C. – a luncheon in which issues of monetary policy and getting more liberty “back into the hands of the people” are discussed.

Bachmann summarized Paul thusly: “I highly value our featured speaker tonight, Congressman Ron Paul…I’ve been just honored to know him…He truly is who he says he is. He’s an awesome man.”

While Bachmann’s introduction applauded Paul for being “one of the leading advocates of freedom,” for having “worked tirelessly for constitutional government,” and for working for “low taxes,” the Congressman from Texas did not exactly heed Bachman’s statement that, “The topic we’re here to discuss tonight – (is) sound monetary policy.” 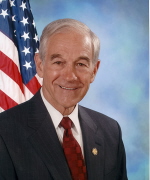 True, Paul did discuss monetary policy in his remarks. But he also proceeded to spend at least half of his nearly 40-minute speech criticizing America’s overreach in foreign policy, for starting wars, for not bringing all our troops home, for the military-industrial complex, and for its war on drugs.

Congresswoman Bachmann, as Paul’s hostess for the evening, was therefore put in an interesting spotlight, seated on stage just 15 feet away from Paul as he fired up the crowd with his libertarian mantra at the podium.

Not surprisingly, there were several statements by Paul in which his critiques against governmental spending, federal taxation, and the intrusion of the federal government into the lives of the individual converged with Bachmann’s own policy positions and worldview. As such, Bachmann demonstrated her support by applauding the following statements by Paul:

· “The good patriot sticks with the people and questions the government.”

· “It was the free market, and freedom, and the industrial revolution that actually was able to eliminate famine and poverty…If you truly care about your fellow man what you ought to do is promote liberty and limited government and more people will be taken care of better than any other way.”

· “And if we have those rights – right to life and right to liberty – we ought to have the right to keep what we earn, which means there would be no income tax.”

· “The main problem with a government that’s authoritarian is they may be well motivated – and there are, we know people in Washington, they’re liberals and they’re bleeding hearts – but, even if you give them a little leeway, the one thing is, they do not know what is best for you. They do not know. They might assume they know.”

When it came to rallying opposition to federal governmental intervention into the lives of the American people, Paul found unusual topics to generate applause both from the audience and the Congresswoman, such as the following:

Bachmann’s support of Paul in his critique of the federal government over the individual was expected along these dimensions. What was not necessarily expected, however, was the extent to which Representative Bachmann publicly supported Paul in some of his isolationist foreign policy views:

· “Don’t go after child health care or the elderly, I say bring all the troops home from Japan, Korea, and Europe.”

· “Whether it’s the financial panic, whether it’s 9/11, or whether it’s getting you psychologically conditioned to start another war, they’re always wanting to build up fear. We have to be on guard and we have to be sure that what our government tells us is the truth and we should never go to war if they’re telling us a lie about what’s happening.”

Paul made a name for himself in the 2008 Republican presidential primaries and debates for being critical of the GOP for how it has changed into a party of runaway spending. Bachmann also supported Paul when he made the following statement:

· “Unfortunately, even when we finally as Republicans got control of the House, the Senate, and the presidency, sadly, we didn’t do a very good job.”

But perhaps the most shocking alliance between Paul and Bachmann was Paul’s attack of U.S. (neo-conservative) foreign policy and the protection of its ‘interests’ around the globe. For example, Bachmann applauded the following critique by Paul regarding America’s decision to put anti-ballistic missiles (long, medium, or short) at Russia’s doorstep in Eastern Europe, for what he calls the “bogus” Iranian threat.

Even Paul’s more extreme big-picture libertarian viewpoints did not seem to make Representative Bachmann blush. Paul talked about an impending “major crisis” that he believes is going to hit America, and that like-minded people will be needed to “restart” America in a much better way; Paul added that there will be a “de facto secession” after the crisis hits. All of these statements generated applause from Bachmann:

· “I believe the crisis will come, because we’re going to have a dollar crisis. When the dollar fails, that means the government checks bounce. And when the checks bounce there will be very little reason for people to be dedicated and worrying too much about the federal government. It will almost be like de facto secession because there will be no way they can control what we’re doing!”

· “Not only do we come together and have a good time and are energized, but we also are coming together because we can see that if we can continue this we can change the whole nature of this country.”

But this is not to suggest Bachmann was on board with all of Paul’s libertarian principles – she is certainly not a full-fledged libertarian. Bachmann sat politely, without directly approving of Paul’s statements, when he decreed the following to raucous applause from the audience:

· “But the wars back home are also very detrimental to our liberty. The one war I talked against for so long and we have to continue to work on, and that is the drug war. We need to end the drug war.”

· “But what happens when it comes to your own body? Your own body – the government is going to tell you everything. Tell you what you can smoke, and drink, and eat, and everything else. I would say this: in a free society you should have the responsibility to make your own decision what is best for you.”

Perhaps most telling of all, however, was at the end of the question-and-answer session from the audience. After the moderator read the final question of the evening: “Ron Paul – 2012?” the audience, and Bachmann herself, leaped out of their chairs to cheers and applause.