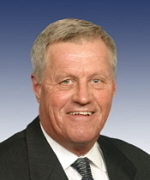 Although long-time Minnesota U.S. Representative Jim Oberstar is regarded as one of the best at “delivering” to his district, in part due to his powerful Transportation Committee Chairmanship, in 2008 Oberstar was actually upstaged by another Capitol Hill veteran from the Gopher State – Collin Peterson (himself the Agriculture Committee Chair).

In the second in a series of reports on Minnesota’s counties, Smart Politics finds that more federal money in 2008 was delivered to counties located in Peterson’s 7th Congressional District per capita (and in absolute dollars) than in counties located in Representative Oberstar’s 8th CD.

(Update: federal money is defined in the Census Bureau data set as follows: “Federal spending include federal expenditures or obligation for the following categories: grants, salaries and wages, procurement contracts, direct payments for individuals, and other direct payments, plus coverage/commitments in the form of direct loans, guaranteed or insured loans, and insurance”).

An analysis of data provided by the US Census Bureau finds the 34 counties that are entirely enveloped by Peterson’s 7th CD received 9.2 percent more in federal spending than the 17 counties that comprise Oberstar’s 8th CD. (The 7th CD also includes a slice of a 35th county, Stearns, whose population mostly resides in the 6th CD). Counties in the 7th district received $8,150 per resident, while residents of the 8th district received an average of $7,460 in federal spending per resident.

The 22 counties that sit inside Tim Walz’s 1st Congressional District received an average of $6,880 per resident. (A very small portion of Walz’s district also bleeds into a 23rd county, Le Sueur).

And how did the counties rank?

Cook County, situated at the very northeastern tip of Oberstar’s 8th CD with a population of 5,437 residents, led the way at #1, with a $21,890 per-resident rate in federal spending.

In fact, counties located in the 7th CD held 16 of the top 21 slots in per capita federal spending last year.

However, it is also the case that most counties in the 7th CD have rather low populations. As such, the statistics can be a bit deceiving. For example, funds used to rebuild a bridge in, say, Marshall County, are going to have a larger per capita impact than money spent on a similar-sized bridge in a more populated county, such as Washington.

But the data does not always follow this path so cleanly.

For example, Ramsey County, home to the State Capital and the second highest population in the Minnesota at a shade over half a million, also ranked near the top at $10,460 per resident in federal spending (#15). Eight of the other nine counties in the state with a population of over 100,000 did not even rank in the Top 35.

Interestingly, the county with the largest rate of population growth, Scott County, has the lowest per-capita rate in federal spending across the state last year, at just $2,140 per person.

Perhaps this could be attributed in small part to the fact that Scott County also has the largest percentage of individuals under 18 years old in the state at 29.7 percent. (Children, of course, do not vote).

(Interestingly, the aforementioned Cook County, as sparsely populated as it is, both leads the state in per capita federal funds spent as well as the lowest percentage of residents under 18 years of age, at just 17.5 percent county-wide).

The other two counties with the next highest rates of individuals under 18 – Wright (28.6 percent) and Carver (28.1 percent) – also rank near the very bottom of per capita federal funding (#83 and #84 respectively).

Minnesota’s most heavily populated county, Hennepin, ranks just outside the top third in federal funds spent within its borders at #33, receiving at $8,610 per capita, well above $7,330 statewide average.

Of course, this analysis is admittedly limited in that it only examines a sample of one year. To get a fuller sense of what counties are (disproportionately) benefiting from federal governmental spending, an over-time analysis is required to parse out the spikes that can occur in a given year.

Still, Peterson’s record sure looks good on paper to his constituents.

As such, the National Republican Congressional Committee’s recent plan to effectuate the 10-term Congressman’s political demise might be a tad premature.

* Dollar amounts (reported here in thousands of dollars) represent either actual expenditures or obligations. Source: US Census Bureau, 2008 Population Estimates. Federal spending include federal expenditures or obligation for the following categories: grants, salaries and wages, procurement contracts, direct payments for individuals, and other direct payments, plus coverage/commitments in the form of direct loans, guaranteed or insured loans, and insurance.