After Republican Governor Tim Pawlenty announced he would not seek a third term early last summer, the list of DFL candidates began to balloon to its current double-digit tally of hopefuls.

The Democratic Party considers the Minnesota open gubernatorial race one of its best chances for a pick-up in 2010, and most political prognosticators currently list the race in the “toss-up” category (e.g. Larry Sabato, Stu Rothenberg, Congressional Quarterly).

But a victory by the DFL in 2010, even in an open-seat race, would be extremely rare when viewed in a historical context, and under a particular political lens: since 1857, Minnesotans have elected a Democrat (or DFL) candidate to the governor’s mansion in just 12 percent of gubernatorial contests with a Democrat in the White House, or 3 of 25 races.

No doubt the Republican Party of Minnesota is salivating over this statistic – particularly given the fact the national approval ratings of the current Democratic President, Barack Obama, have been hovering at or below the 50 percent mark in the vast majority of public opinion polls released since mid-November. 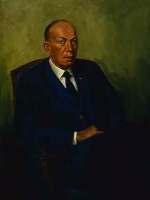 The last DFLer to win a governor’s race while a Democrat was in the White House was Karl Rolvaag, some 47 years ago in 1962 when John F. Kennedy was finishing up his second year in office.

Prior to that, only Winfield Hammond (1914, with Woodrow Wilson in office) and Henry Sibley (1857, with James Buchanan in office) managed to win the state for the Democratic Party.

It should be noted that the Republican Party had historically dominated Minnesota politics (and the Upper Midwest generally) until the middle of the 20th Century. Overall, Republicans have won 70 percent of Minnesota gubernatorial elections since statehood (45 of 64), with Democrats / DFLers winning 14 and third parties winning 5 races.

That means 11 of the 14 gubernatorial elections that the DFL or Democratic parties have managed to win in the Gopher State across the past 150+ years have taken place with a Republican in the White House.

* John Lind was the Democrat-People’s Party nominee for Governor. All other winners prior to 1944 were elected under the Democratic Party banner. All those after 1944 were DFLers. Data compiled by Smart Politics.

What is particularly interesting is that Democrats have won only 3 of 25 gubernatorial elections with a Democrat in the White House despite the fact that the state had most recently voted for the Democratic presidential nominee in 13 of these instances.

Minnesota Gubernatorial Election Winners With a Democrat in the White House, 1857-2006

* Indicates election year in which Minnesotans had voted into office a Democratic president in the most recent presidential election. Note: there was no Democratic Party nominee in the 1936 gubernatorial contest. Data compiled by Smart Politics.