Republicans have swept nearly half the gubernatorial election cycles in the region over the past 100 years, including 1990 and 1994

This November, the states of Iowa, Minnesota, South Dakota, and Wisconsin will each hold gubernatorial elections – the last three of which will be open-seat races.

However, it has only been 16 years since Republicans ran a clean sweep through the gubernatorial elections in the Upper Midwest – winning all four states in 1994.

The Republican Party thus has its eyes set on another Upper Midwestern sweep in 2010 – even though the GOP must defend two open seats (South Dakota and Minnesota).

Republicans have historically dominated gubernatorial races in this four state region. Over the past 100 years, the GOP has won 72.0 percent of governorships, or 121 of 168 contests.

Democrats (and the DFL) have won just 39 races in the region (23.2 percent) with third parties winning the remaining 8 contests (4.8 percent).

In fact, since 1906, when Iowa joined Minnesota, Iowa, and Wisconsin in holding its gubernatorial elections in even-numbered years, the GOP has swept through all four states in 17 of 40 election cycles.

Democrats were shut out from the winner’s circle in each of these 17 election cycles plus an 18th – in 1942 – when the Republicans won Iowa, Minnesota, and South Dakota and the Progressive Party candidate won the State of Wisconsin.

Democrats, meanwhile, have swept through the region just one time in the last century – in 1958.

(Republicans also failed to win a gubernatorial race in 1932 and 1934 when a mix of Democrats, Progressives, and Farmer-Laborites were elected in the region).

Here is a snapshot of the historical trends over the past 100 years:

In South Dakota, two-term GOP Governor Tim Rounds in term-limited. Even so, the Mount Rushmore State is always the safest bet for a GOP victory in the region. Republicans have won eight gubernatorial elections in a row dating back to 1978, as well as 35 of the last 43 races over the past century (81.4 percent).

The Democratic gubernatorial drought in South Dakota is the longest of any state in the country. 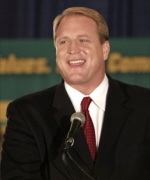 The one incumbent on the ballot in 2010 will be Iowa’s Democratic Governor Chet Culver. Culver, however, saw his approval numbers dip to as low as the mid-30s this past year (August 2009, SurveyUSA) and may face a formidable opponent in former 4-term Republican Governor Terry Branstad.

The 12-year hold the Democratic Party of Iowa will have had on the governor’s mansion at the end of Culver’s 1st term is actually the longest the Democrats have ever held the office in Hawkeye State history.

In the Badger State, unpopular Democratic Governor Jim Doyle announced several months ago he would not be on the ballot in 2010, but his absence from the race has not seen quite the avalanche of candidates as seen in Minnesota after Governor Tim Pawlenty’s announcement he would not seek a third term early last summer.

The Gopher State has presented Republicans with their stiffest gubernatorial competition in the region. And although most analysts label this open-seat race a ‘toss up’ the DFL does not have history on its side.

At 23+ years, the DFL also currently has the third longest gubernatorial drought in the nation for the Democrats, behind only South Dakota and Utah.

Moreover, Democrats have had historical difficulties in winning gubernatorial elections in Minnesota with a Democrat in the White House – losing 22 of 25 such races since statehood.