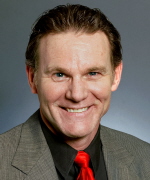 Five-term DFL Senator Steve Murphy’s announcement last week that he would not seek reelection in the fall puts in serious jeopardy the DFL’s ability to hold a blue seat it has held in red territory for a generation.

A Smart Politics analysis of the statewide and district races conducted since redistricting in 2002 finds Murphy’s 28th Senate District is not only Republican-leaning in and of itself, but it is decidedly more so than the Gopher State as a whole. GOP candidates have enjoyed a higher margin of victory in the 28th SD (or a lower margin of loss) in 23 of 23 statewide and district races over the last four election cycles.

SD28 may appear on the surface to be a bona fide ‘battleground’ district, as it was carried by Barack Obama in 2008, by DFLers Mike Hatch (2002) and Lori Swanson (2006) in their respective races for Attorney General, by Rebecca Otto for State Auditor in 2006, and by Amy Klobuchar for U.S. Senate in 2006. The district also registered more DFL than GOP votes for U.S. Representative in 2008 (the 28th is situated in the 1st and 2nd Congressional Districts).

Even with an incumbency advantage, Senator Murphy himself had to struggle with fairly competitive matchups in his successful bids for 4th and 5th terms. Murphy won by just 4.9 points over Gary Iocco in 2002 and by 9.0 points over eventual GOP HD 28B Representative Steve Drazkowski during the first Democratic tsunami year of 2006.

Moreover, Republicans have consistently fared much better in the 28th than they have statewide across all offices:

· In presidential races, George W. Bush performed +6.6 points better against John Kerry in the 28th district than he did statewide. And while McCain lost the district in 2008, he performed 8.5 points better than his statewide margin of loss.

· In U.S. Senate contests, Republican Norm Coleman’s margin of victory in the 28th was 2.9 points larger in 2002 than his statewide victory and 4.5 points better in his 2008 loss. In 2006, GOPer Mark Kennedy lost the 28th district by 5.4 fewer points than he did the Gopher State overall.

· In gubernatorial contests, Tim Pawlenty carried the district in both 2002 and 2006, and performed 8.3 points better against the DFL than his statewide margin in 2002 and 7.1 points better in 2006.

In short, any momentum picked up by the Republican Party in the Gopher State in 2010 should highlight even more strongly the GOP advantage in the 28th SD.