Text of Obama’s Address has a readability score for an average 8th grader – two grades lower than George W. Bush’s Addresses and the historical average for modern presidents

Barack Obama’s ability as a public speaker since his 2008 presidential campaign has been alternately viewed, often depending on whether or not one is an Obama supporter, along various dyads: being inspirational versus being aloof, intellectualizing versus lecturing etc.

Along those lines, in her first month as a commentator for FOX News, Sarah Palin criticized Obama’s first State of the Union Address on Wednesday night as “lecturing” the American public.

Unlike the criticisms hurled at his predecessor, however, few have ever charged that the President, a former senior lecturer in Constitutional law at the University of Chicago Law School, has written or spoken too simplistically or catered his words to the lowest common denominator.

However, a Smart Politics analysis of nearly 70 oral State of the Union Addresses since the mid-1930s finds the text of Obama’s speech on Wednesday evening to have one of the lowest scores on the Flesch-Kincaid readability test ever recorded by a U.S. President.

Smart Politics ran the Flesch-Kincaid test on each of the last 68 State of the Union Addresses that were delivered orally by presidents before a Joint Session of Congress since Franklin Roosevelt. Excluded from analysis were five written addresses (Truman in 1946 and 1953, Eisenhower in 1961, Nixon in 1973, and Carter in 1981) and two addresses that were delivered orally, but not by the President himself (Roosevelt in 1945, Eisenhower in 1956). Prior to FDR, most, but not all, such Addresses were delivered in writing.

Obama’s Flesch-Kincaid grade level score of 8.8 for his first State of the Union Address was the fourth lowest score since FDR’s first Address in 1934.

What this means is that Obama wrote and delivered a speech that incorporated shorter sentences, with those sentences containing shorter words, than nearly every such Presidential Address in the modern era.

Across the more than 75 years of speeches under analysis, the average sentence in State of the Union Addresses is 20.6 words in length.

But the average length of sentences comprising Obama’s 2010 address was just 16.6 words in length – or 19.4 percent shorter than average. This also marks the fourth lowest average words per sentence used in State of the Union Addresses during the period under study.

President Obama’s comparative brevity in his sentence structure and his frequent use of monosyllabic words can be seen in the following excerpts from his Address:

“Again, we are tested. And again, we must answer history’s call.”

“We have finished a difficult year. We have come through a difficult decade. But a new year has come. A new decade stretches before us. We don’t quit. I don’t quit.” 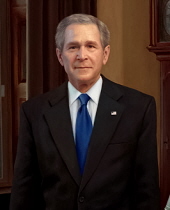 As such, the speech by ‘the professor’ stands in contrast to his predecessor, ‘the cowboy,’ George W. Bush, who was frequently skewered by the left and late-night talk show hosts for his public speaking abilities, his intelligence, and his misuse of the English language.

Bush averaged a Flesch-Kincaid score of 10.4 across his seven State of the Union Addresses – or nearly two full grades higher than Obama’s speech. Bush’s speeches also averaged 2.4 more words per sentence than Obama, at 19.0. 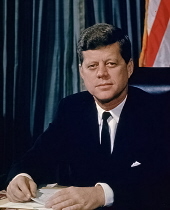 Overall, the Flesch-Kincaid grade level of presidential State of the Union Addresses has decreased in recent decades – with the last five presidents notching the five lowest scores.

John F. Kennedy’s Addresses averaged a Flesch-Kincaid grade level of 13.2 – with these speeches averaging 23.8 words per sentence. Dwight Eisenhower was close behind with a Flesch-Kincaid score of 12.8, with FDR at 12.5, Nixon at 11.6, and Gerald Ford at 11.2.

The only other orally delivered State of the Union Addresses that were written with fewer average words per sentence than Obama’s 16.6 average in his 2010 Address, and that scored lower than Obama’s 8.8 Flesch-Kincaid score, were:

Though, with his shorter sentences and shorter words, Obama’s Address may have been readable for junior high school students, it is not known if the average 12 and 13 year old was able to sit still through Obama’s speech. At approximately 7,300 words, only Bill Clinton spoke more words before Congress and the nation in State of the Union speeches since 1934 (in 1994, 1995, 1999, and 2000).

This is not to suggest that short sentences cannot be effective when craftily composed and delivered effectively.

For example, conservative talk show host Laura Ingraham told FOX News’ Bill O’Reilly Thursday evening that her favorite part of Obama’s speech was the passage in which the President vowed the United States should seek to achieve and maintain it’s #1 status in the world.

“These nations — they’re not standing still. These nations aren’t playing for second place. They’re putting more emphasis on math and science. They’re rebuilding their infrastructure. They’re making serious investments in clean energy because they want those jobs. Well, I do not accept second place for the United States of America.”

In fact, 31 of the 51 words in the passage above are monosyllabic.

In the end, it is not knowable at this time whether or not Obama’s speech was effective in delivering what he wanted to achieve.

Still, it is, at the very least, interesting that ‘the professor’ should write and deliver a speech that has a readability level two grades lower than those crafted and delivered by ‘the cowboy.’