Democrats currently hold 43 of the 50 least competitive seats in the nation; John Lewis (GA-05), Kendrick Meek (FL-17), and Richard Neal (MA-02) have not faced a challenger since new district lines were drawn in 2002

While Republicans are ever hopeful that they will make substantial gains in the U.S. House this November, there are several dozen Democratic U.S. Representatives who will assuredly sleep easily through Election Day no matter how briskly the partisan winds might favor the GOP.

A Smart Politics analysis of 1,740 U.S. House general elections since 2002 finds nearly 90 percent of the 100 most lopsided congressional districts – those with an average victory margin of more than 50 points – are held by Democrats.

That a substantial number of U.S. House races end up in blow-out elections should come as no surprise. Since 2002, the average margin of victory across the more than 1,700 contests has been 39.2 points.

But a 39-point victory margin would be a close shave for some members of the U.S. House – including many Democrats. 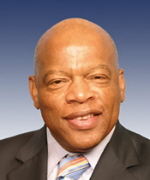 John Lewis (pictured, GA-05), Kendrick Meek (FL-17), and Richard Neal (MA-02) represent the three districts with the largest average margins of victory since 2002 – with none of these candidates facing a single challenger during this four-election span. Representative Neal has not faced a GOP opponent since 1996.

Rounding out the Top 10 least competitive U.S. House districts since 2002 are:

Democrats hold 42 of the Top 50 safest districts in the country, with a 43rd (Democrat Robert Wexler’s FL-19 seat) currently vacant.

Over half of the members of Congress representing the least competitive districts in the nation are members of the Congressional Black and Hispanic Caucuses.

In total, 104 districts have been decided by an average victory margin of greater than 50 points across the last four election cycles, or nearly 1 in 4 House races (23.9 percent).

Democrats control the vast majority of these blow-out districts – winning 92 of these 104 seats in 2008.

Democrats have also done a much better job since 2004 of simply fielding candidates across the nation’s 435 congressional districts.

· In 2002, a total of 80 U.S. House districts did not have either a Republican or a Democrat on the general election ballot (18.3 percent), including 44 Democrats and 36 Republicans.
· In 2004, that number decreased to 14.9 percent, with voters in 65 congressional districts not having the choice of a Democratic (36 districts) or a Republican (29 districts) candidate.
· In 2006, when Democrats first began to smell blood in the water, the party began to field candidates across nearly all 435 districts. In that year, only 7.6 percent of congressional districts (56) did not have both major parties on the ballot – 11 districts without a Democrat and 45 without a Republican.
· In 2008, 56 districts once again only had one major party running for office, this time 14 without Democrats and 42 without Republicans.

Despite many of these gaudy victory margins, some members of Congress are fearing the backlash against incumbents this November – and not just Democrats.

For example, 15-term Republican David Drier (CA-26) half-jokingly said on the Dennis Prager radio show on Tuesday that he doesn’t like to reveal how long he’s been in the U.S. House (29+ years) because of the anger voters are feeling today towards incumbents in Washington D.C..

Still, Representatives in the vast majority of these U.S. House districts have nothing to fear.

While the average length of service across the entire U.S. House is 11.2 years and the average length of service for those members of Congress serving the Top 50 most competitive districts in the country is just 4.2 years, those representing the 50 least competitive districts have been in the House for an average of 17.1 years.

General elections only. ‘Years’ reflects the total number of years served in the U.S. House, whether consecutively or otherwise, across all districts the member of Congress has served. Data compiled from Office of the Clerk, U.S. House of Representatives by Smart Politics.