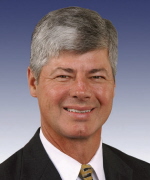 Michigan Democratic Congressman Bart Stupak’s (MI-01) rise to national prominence in recent weeks by first standing firmly against and then ultimately voting for the Patient Protection and Affordable Care Act, may have made him an unofficial Republican target, much like how Democrats reacted nationwide to oust Republican Joe Wilson (SC-02) after his infamous “You lie” outburst during President Obama’s Address to Congress last autumn.

With one simple vote, Stupak may have completed a rare political hat trick – falling out of favor with all three sides of the ideological spectrum:

· The left, some of whom were angered by the Congressman drawing abortion so prominently into the health care debate,
· The right, some of whom felt Stupak betrayed the pro-life values he publicly champions,
· And the center, some of whom may see Stupak as a Representative who displayed political weakness by caving to the pressures from the Democratic leadership who were fighting with all their might to get their health care bill through the House.

But even if all this is the case, Stupak’s seat will not be an easily won prize for the GOP. Stupak is not even in the top two most vulnerable Democrats from the state of Michigan, and, with over 17 years of service in the U.S. House, the Congressman has a larger margin for error than many, even if indeed his Sunday vote was a political miscalculation.

A Smart Politics analysis of U.S. House election data finds that Stupak’s 1st CD of Michigan has been only the 217th most competitive district in the country over the last four election cycles.

Since new district lines were drawn in 2002, Stupak has won by an average margin of 35.8 points, or just slightly more competitive than the 39.2-point average victory margin across all 435 U.S. House districts nationwide.

Stupak has notched at least 65 percent of the vote in each election since 2002 (the 1st CD now encompasses all of Michigan’s Upper Peninsula and the northeastern part of the Lower Peninsula).

Since winning his first election in 1992, Stupak has won an average of 62.9 percent of the vote, winning his nine races by an average margin of 27.7 points:

While Republicans and conservatives may be escalating their rhetoric against Stupak, their sights are much more likely set against lower hanging Democratic fruit in the Wolverine State: Democrats Mark Schauer (MI-07) and Gary Peters (MI-09) are freshman congressmen who represent two of the most competitive congressional districts in the nation.

Schauer’s 7th CD has been the 22nd most competitive district in the country since 2002, with an average margin of victory of 12.4 points.

Peter’s 9th CD has been the 27th most competitive district in the nation during this four election cycle span, with an average victory margin of 13.0 points.

Through December 2009, Stupak had raised $461,220 for the current election cycle, more than 72 percent of which came from PAC money. Democrat and former Charlevoix County Commissioner Connie Saltonstall is lodging a primary challenge against the nine-term Congressman.