Women are still proportionally underrepresented in 48 states, with 19 states and 22 percent of the nation’s population without a female U.S. Senator or Representative

Smart Politics recently observed that while the number of Republican women in the U.S. House has been on the decline in recent years (now at 17 members – the lowest level since 2000), that caucus’ conservative ideological voting record is at an all time high.

However, although the total number of women in the U.S. House and Senate, whether Republicans or Democrats, is also at an all time high, the percentage of women serving in Congress is still far below their percentage in the population at large.

A Smart Politics analysis finds women are proportionally underrepresented in 48 states across the country, including 19 states that currently have no women serving in the U.S. Senate or U.S. House, tallying more than 22 percent of the nation’s population. 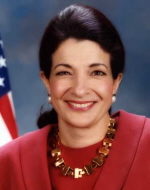 Women are proportionally ‘overrepresented’ in just one state – Maine. The Pine Tree State is represented by two Republican women in the U.S. Senate (Olympia Snowe (pictured) and Susan Collins) as well as Democrat Chellie Pingree in one of the state’s two congressional districts, or 75 percent of its Capitol Hill delegation.

Women are represented equal to their population in one other state – New Hampshire – with Democratic women holding 50 percent of its posts in Congress: one of the two U.S. Senate seats (Jeanne Shaheen) and one of the two U.S. House seats (Carol Sea-Porter in the state’s 1st CD).

Six states have never had a female serve in the U.S. House: Alaska, Delaware, Iowa, Mississippi, North Dakota, and Vermont.

Four states have never had a woman serve in either chamber: Delaware, Iowa, Mississippi, and Vermont.

After Maine and New Hampshire, Nevada has the third largest percentage of its D.C. delegation represented by women, at 40 percent (2 representatives), with California the fourth largest (38.2 percent; 2 senators, 19 representatives).

Alaska, South Dakota, and Wyoming are tied for fifth at 33.3 percent – with each of these sparsely populated states served by one female in its three member D.C. delegation.