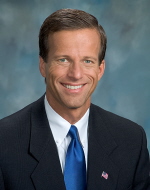 While South Dakota has long been a Republican stronghold in state politics and presidential elections, the Democratic Party has performed quite competitively in the Mount Rushmore State in Congressional races for several decades.

However, in what can only be described as an embarrassment for Democrats, the Party’s failure to field a candidate in the U.S. Senate contest against 1-term GOP incumbent John Thune marks the first time in 34 contests since popular vote U.S. Senate elections were introduced in 1914 that a Democratic candidate has failed to appear on the ballot in South Dakota.

But the Democrats’ absence from the ballot against Senator Thune is even more historic than that.

Smart Politics analyzed more than 1,050 general election U.S. Senate races conducted since the end of World War II, and found there to have been 58 contests in which either the Democratic Party or Republican Party failed to field a candidate. (The 2010 South Dakota Senate race makes 59).

Across these 58 elections, there has never been a greater plunge into oblivion in the race for a U.S. Senate seat from either party than what has happened in South Dakota in 2010 – from the 49.4 percent of the vote tallied by 2004 Democratic nominee Tom Daschle, to being completely off the ballot six years later.

The previous record was held by Virginia Democrats in 2002 when they failed to field a challenger against Republican John Warner, after notching 47.4 percent of the vote with Democrat (and future Senator) Mark Warner six years prior in 1996.

For the GOP, the biggest drop off is held by Louisiana Republicans in 1992, when the Party did not field a challenger against conservative Democrat John Breaux. Six years prior, in 1986, Republican U.S. Representative W. Henson Moore won 47.2 percent of the vote against Breaux when he won the first of his three terms.

* Bernie Sanders declined to accept the Vermont Democratic Party nomination in 2006. Note: General elections only. Data compiled from the Office of the Clerk of the U.S. House by Smart Politics.

Historically, it was the Republican Party that struggled to field candidates across the nation in U.S. Senate races – accounting for 49 of the 58 absences from the ballot in such contests from 1946 through 2008.

This tally was due in large part to the dominance of the Democratic Party in the South until the last few decades – with 47 of these 49 GOP absences occurring prior to the Republican Revolution of 1994, with all but one of these taking place in the South (Hawaii, 1974).

However, since 1994, it is the Democratic Party which has seen the larger gap in its electoral resume – tallying seven U.S. Senate races without a candidate on the ballot compared to just two for the GOP.

From 1946 through 1988, the Democrats had an unblemished record – fielding a nominee in each of the 730 U.S. Senate general elections that were conducted during this span.

Overall, Louisiana is the state with the most U.S. Senate elections with just one major party candidate on the ballot since the end of World War II with 10, followed by Georgia and Mississippi (8 each), Arkansas and Virginia (7 each), and Alabama (4).

General Election U.S. Senate Races After World War II without a Democrat or Republican on the Ballot, 1946-2008

* Bernie Sanders declined to accept the Vermont Democratic Party nomination in 2006. In 1952, California Republican William Knowland cross-filed and received both the Republican and Democratic nominations, so the Democratic Party technically had a candidate on the ballot that year. Data compiled from the Office of the Clerk of the U.S. House by Smart Politics.

And how big of a step back is the 2010 South Dakota debacle for the Democratic Party?

To be sure, Republicans have dominated South Dakota state politics.

However, in Congressional elections, South Dakota Democrats had been quite competitive, electing a mixture of conservative to moderate candidates into the U.S. House and Senate across the last few generations.

· Democrats have won 11 of the last 15 elections for the state’s at-large seat in the U.S. House of Representatives dating back to 1982, including the last four by Stephanie Herseth Sandlin.

· Democrats have also won 10 of the last 16 U.S. Senate elections in the Mount Rushmore State dating back nearly 50 years to 1962.

Senator Thune will be opposed by Independent candidate (and 2002 Libertarian nominee) Kurt Evans in November. Other independents may jump into the race prior to the June filing deadline.