Barton has enjoyed a 39-point average margin of victory since 1984; will he follow in his predecessor Phil Gramm’s footsteps by getting booted off a House committee?

Republican U.S. Representative Joe Barton (TX-06) may have been a stranger to competitive battles at the ballot box for most of his D.C. career, but the Texas Congressman may now be in the midst of the toughest fight of his political life.

That fight began today within his own party after Barton delivered – from prepared remarks – a strangely sympathetic and apologetic statement to BP’s CEO Tony Hayward at a congressional hearing:

“I’m ashamed of what happened in the White House yesterday. I think it is a tragedy in the first proportion that a private corporation can be subjected to what I would characterize as a shakedown…I apologize. I do not want to live in a country where anytime a citizen or a corporation does something that is legitimately wrong, is subject to some sort of political pressure that is again, in my words, amounts to a shakedown. So I apologize.”

Although Barton preceded his controversial comments with the disclaimer, “I’m speaking this totally for myself, I’m not speaking for the Republican Party, I’m not speaking for anybody in the House of Representatives but myself,” and has since apologized for his apology, the Texas Congressman has endured a backlash from his own party, led by fellow Republican Jeff Miller’s (FL-01) call that Barton step down as ranking member of the Energy and Commerce Committee.

But what is Barton’s bigger challenge – holding onto his ranking member status or winning a 14th term at the polls this November?

Barton’s district, which is located south of the Dallas/Fort Worth area of the Lone Star State, is a deep red district.

The Cook Political Report’s Partisan Voting Index scores it as the 56th most Republican district in the country, with a +15 point GOP advantage.

However, since redistricting in 2002, a Smart Politics analysis finds TX-06 to have been the 175th most competitive House district out of the 435 across the nation.

That may not make its contests nail-biters, but the district has been more competitive than 60 percent of the rest of the country over the last eight years.

And now Barton has Apologygate with which to contend, not simply his Democratic challenger, David Cozad.

Barton has won his four races in this redistricting period by an average of 31.4 points, with the last two contests in 2006 (by 23.4 points) and 2008 (26.4 points) the two narrowest victories for the Congressman during the past 20 years.

And while it may seem unlikely that Barton could see the 25-point advantage he has enjoyed during the last two election cycles completely evaporate in 2010, consider this:

In 2006, albeit a Democratic tsunami election year, 15 Republicans lost their seats with a 25-point or larger swing to their Democratic challengers from the 2004 election cycle – including three who had 20+ years of service like Barton: Nancy Johnson (CT-05), Clay Shaw (FL-22), and Curt Weldon (PA-07).

Barton first won his seat in 1984 over Democrat Dan Kubiak with 56.6 percent of the vote, in an open seat race after his predecessor Phil Gramm opted to run for the U.S. Senate.

Gramm had previously represented the district as a Democrat from 1979 until January 1983, when he resigned from his seat, switched parties, and then ran for the vacant seat as a Republican in a special election the next month and won. Interestingly, this series of events was trigged by Democrats kicking Gramm off the Budget Committee for supporting Ronald Reagan’s tax cuts. Rep. Jeff Miller’s statement today suggested Barton was not fit to lead or serve on the Energy and Commerce Committee.

Barton and Gramm are the only Republicans to have ever represented the 6th CD in all its different geographic permutations over the decades – after a 108-year Democratic reign.

Overall, Barton has received an average of 68.5 percent of the vote during his 13 victories over the past quarter century. Democrats have averaged a paltry 27.9 percent and failed to even field a candidate during the 1996 and 2000 election cycles. Barton has won by an average victory margin of 38.8 points since 1984.

With that electoral pedigree, Barton no doubt hopes the media, and Democratic fundraisers, move on to the next political news story quickly, unlike what happened to another GOP Joe some months ago. 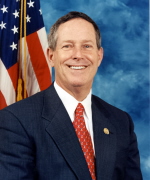 Rob Miller, who squares off against Wilson in a 2010 rematch, has turned Wilson’s “You lie” gaffe hurled at President Barack Obama in an address before a Joint Session of Congress last September into a $2.3 million windfall for his campaign (numbers through March).

Libertarian candidate Byron Severns is also vying for the seat.