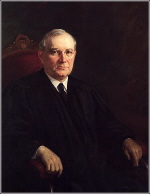 As Elena Kagan’s confirmation hearing reached its second day before the U.S. Senate Judiciary Committee – whose members include both Minnesota Senators – one recalls that Amy Klobuchar herself was once speculated by D.C. insiders to be on the ‘long list’ of potential nominees some months ago.

While Klobuchar, a former Hennepin County attorney, did not make the cut on this occasion, the Gopher State has been fairly represented on the Court over the decades.

Minnesota has given birth to three justices, plus a fourth who grew up and spent much of his professional career in the Twin Cities.

A Smart Politics analysis finds no other state west of the Mississippi River has had more justices born within its borders than Minnesota. (California is tied with three).

The Gopher State stands in stark contrast to the rest of its Upper Midwestern neighbors in terms of its production of such prominent jurists.

Only one such justice was born in Wisconsin (former Chief Justice William Rehnquist) and none have been born or raised in Iowa, South Dakota, or North Dakota.

Minnesota’s first U.S. Supreme Court justice was Pierce Butler (pictured above), the 71st Justice on the Court. Butler was born in Northfield in 1866 and was educated (Carleton College) and launched his legal career (in St. Paul, as a Ramsey County Assistant County Attorney) in the Gopher State.

Butler was nominated by Republican President Warren Harding on December 21, 1922 and confirmed by the Senate on a 61-8 vote on January 2, 1923.

Butler is perhaps most well known for being one of the Court’s “Four Horsemen” – four conservative justices in the 1930s whose resistance to several of President Franklin Roosevelt’s New Deal programs prompted FDR’s (failed) attempt to pack the court in 1937. (The other three horsemen were George Sutherland, Willis Van Devanter, and James Clark McReynolds).

Justice Butler served on the Court until his death on November 16, 1939, after nearly 17 years on the bench.

Seven months prior to Butler’s death, William Douglas was confirmed to the Court – the fourth justice Franklin Roosevelt landed on the bench. Douglas, the 79th Justice, was born in 1898 in west central Minnesota (in the town of Maine).

Douglas did not grow up in Minnesota, however, and lived most of his childhood in Washington and received his legal education in New York at Columbia.

During Douglas’ tenure on the Court, two more justices with strong Minnesota ties made their appearance – the first two nominees President Richard Nixon saw confirmed by the Senate. 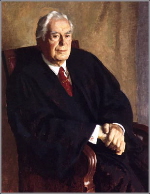 The first, Warren Burger, was a St. Paul native, born in 1907. Burger received his legal education and began the first leg of his professional career (teaching law) at St. Paul College.

Burger was nominated by Nixon on May 22, 1969 to be Chief Justice of the Court, and was confirmed by a 74-3 vote on June 9th to become the 97th Supreme Court Justice.

As Chief Justice, Burger presided over a Court during an era when several landmark cases reached the bench – particularly in the 1970s, such as Roe vs. Wade (voting with the majority to broaden the right to privacy in the case of abortion) and Furman vs. Georgia (dissenting against the invalidation of all death penalty laws across the nation).

Serving alongside Berger for 16 of these years was his childhood friend, Justice Harry Blackmun, the 98th Justice of the Supreme Court.

Blackmun was born in Nashville, Illinois on November 12, 1908, but grew up in St. Paul. After being educated at Harvard for undergrad and law school, Blackmun returned to the Gopher State to begin his legal career. Throughout the 1930s and 1940s Blackmun both practiced and taught law in Minnesota.

Blackmun was nominated by President Nixon on May 14, 1970 and was confirmed on June 9th by a unanimous 94-0 vote.

Justice Blackmun, a Republican, wrote the majority opinion on Roe vs. Wade, and over the course of his career on the bench gradually drifted more and more towards the liberal wing of the Court.