Death more common than defeat in ending the reign of Senate’s majority and minority leaders; over 86 percent have won reelection since 1920 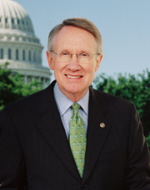 Since party floor leaders were first designated in the U.S. Senate 90 years ago, these privileged positions have traditionally aided these U.S. Senators in coasting to victory during their subsequent general election matchups.

This has not been the case for Nevada Senator and Democratic Majority Leader Harry Reid during his bid for a fifth term in 2010.

Nevada GOP nominee Sharon Angle and Reid, who became the Democratic floor leader in 2005, have been within five points of one another during the last two-dozen non-partisan horserace polls conducted since late July.

For the Democrats, this is a replay of sorts of 2004, when Republican John Thune defeated Tom Daschle by less than 5,000 votes. In that election, a majority of South Dakotans determined it was more important to send a freshman Republican to D.C. than to retain Daschle, who had been the Democratic floor leader for a decade.

Despite the Daschle loss, the defeat of a Senate floor leader at the ballot box is still exceedingly rare.

A Smart Politics analysis finds that party floor leaders have won more than 86 percent of general election contests while holding that title: 25 wins and just 4 losses.

Majority and minority party leaders have also averaged 61.8 percent of the vote and enjoyed an average margin of victory of 24.8 points across these 29 elections.

Since 1920, there have been 11 Democratic and 16 Republican floor leaders in the U.S. Senate. (Note the data in this analysis includes Massachusetts Republican Henry Cabot Lodge, who was the GOP’s party conference chairman and served as an unofficial party leader when the Democrats elected their first leader, Oscar Underwood in 1920).

Indiana Republican (and Majority Leader) James Watson was the first – losing to Democrat Frederick Van Nuys by 13.6 points during the Democratic landslide of 1932.

It would take another 52 years before another Senate floor leader would be toppled at the polls – Daschle, who lost by 4,508 votes to John Thune in 2004.

But most reelection bids by such Senate leaders have not been so close.

Senate majority and minority leaders have won their reelection bids by more than 15 points in 18 out of 29 contests over the past 90 years.

Overall, party floor leaders have averaged 61.8 percent of the vote across these 29 reelection contests, with challengers receiving just 37.1 percent, or a +24.8-point differential.

And just how unusual is it for Senate majority and minority leaders to see their leadership reign end through an election defeat?

Unusual enough that more Senate floor leaders have exited their position through death than defeat at the ballot box.

But the trouble Harry Reid finds himself in today is not wholly out of step with the times.

As Congress’ approval rating has been particularly low in recent years, there has been a trend of its majority and minority leaders in jeopardy.

In addition to Daschle’s 2004 defeat, Republican Minority Leader Mitch McConnell of Kentucky escaped with a 5.9-point victory over Democrat Bruce Lunsford in 2008 – the fifth narrowest victory by a majority or minority leader during the past 90 years.

All signs from the Silver State indicate the Reid-Angle matchup will provide even more drama a week from Tuesday.