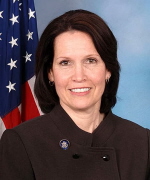 History:
Betty McCollum entered Congress by winning the open seat left by 12-term DFL congressman Bruce Vento in 2000. McCollum did not win a majority of the vote in that race, but still beat her Republican opponent Linda Runbeck by 17.1 points. Tom Foley won a then record 20.6 percent of the vote for the Independence Party.

Prior to this DFL streak, Republicans won every 4th District race from 1920 through 1946, with the exception of 1944 and 1932 (in which, due to a redistricting controversy, all nine Minnesota Representatives to the U.S. House were elected as at-large representatives).

McCollum, a former teacher and member of the North St. Paul City Council, was the second woman from Minnesota elected to serve in Washington since 1858 when Minnesota achieved statehood. McCollum serves on the House Appropriations and Budget Committees.

In 2010, McCollum will face Republican Teresa Collett and Independence Party candidate Steve Carlson. Although McCollum is one of the least funded incumbents in the Upper Midwest, she does not need to be, given her district’s partisan make-up. Even without the $1+ million raised by many of her Gopher State colleagues, McCollum still outraised Collett by a 5 to 1 margin through mid-October.

Outlook:
The 32.3-point average margin of victory in the 4th CD since redistricting in 2002 makes it the 182nd most competitive House district in the nation during that span. Overall, the 4th CD has the second biggest Democratic tilt in the state, with a +13 Democratic Partisan Voting Index. The district voted for Barack Obama by 31 points in 2008 and John Kerry by 25 points in 2004.

McCollum is running in one of the most solidly Democratic congressional districts in the Upper Midwest and thus has an easy path to extend the DFL run in the district to 32 consecutive elections.