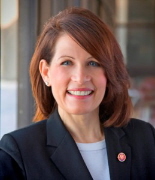 While Congresswoman Michele Bachmann may not have actually been Nancy Pelosi’s #1 GOP target in 2010, the controversial Republican was certainly at the top of the list for many Democrats in and out of the Gopher State.

But an analysis of Bachmann’s district, her messaging, and her fundraising skills should have warned Democrats that there would be little chance to defeat her in 2010 – even back in early to mid-2009 when the Democratic Party was still in good standing and Barack Obama’s job approval rating was flying high during his honeymoon period.

Back in February 2009, when GOP momentum and party ID had nearly bottomed out, Smart Politics wrote a report entitled, “The Unsinkable Michele Bachmann”, assessing her 2008 victory which she delivered in the face of increasing Democratic electoral success in her 6th congressional district up and down the ballot.

Despite the 6th CD’s electoral trends, and the passion with which liberals were already amping up to defeat the Congresswoman in November 2010, the report concluded that Bachmann was not beatable, 21 months before the November 2nd election:

“And if there is any movement back to the GOP in partisan ID, Bachmann should win reelection by a much more comfortable margin in 2010.” (Smart Politics, February 26, 2009)

The Congresswoman won 52.5 percent of the vote with just 39.8 percent for DFLer Tarry Clark. It was Bachmann’s most comfortable victory of her three congressional campaigns to date.

But throughout the last two years, Democrats remained single-minded about defeating Bachmann, and recruited a prominent State Senator – and millions of dollars – to do so.

A fundraising war ensued, with Bachmann ending up raising $70 per vote received on Election Day – a figure that will only rise when post October 13th campaign finance numbers are filed in the coming weeks.

And why did Democrats get into this fundraising war, put Clark’s political future on the line, and subsequently lose her 15th Senate District seat as a result?

Some on the left chose to believe Bachmann only won during the Democratic wave of 2008 because of the presence of Independence Party candidate Bob Anderson on the ballot, who received 10 percent of the vote that year.

However, pre-election polling by SurveyUSA in October 2008 found Anderson’s support to be equally split among partisans. (Putting aside the fact that Anderson was a right-leaning candidate, closer to Bachmann’s ideology than DFL nominee Elwyn Tinklenberg).

As a result, instead of investing more heavily in 2010 in the neighboring 3rd CD, a district with no partisan tilt (the 6th CD is +7 GOP), Democrats and Clark raised a record amount of money for a Minnesota U.S. House challenger, raising over $4 million through mid-October for her 6th CD bid.

Bachmann too set Joe DiMaggio-esque records – with over $11.3 million raised through mid-October.

With 159,949 votes cast for her candidacy, that means Bachmann had raised $69.62 per vote won, compared to $34.82 for Tarryl Clark – with both numbers to rise when data for funds collected after October 13th are submitted.

The amount of money Bachmann’s campaign had garnered through the “pre-general” filing period skyrocketed from the previous two election cycles.

In 2006 and 2008, Bachmann had approximately the same ratio of funds raised through the pre-general period to votes won on Election Day – $12.27 per vote in 2006 and $12.86 per vote in 2008 (though the Congresswoman raised a substantial amount during the closing few weeks of the ’08 campaign after her Hardball appearance).

In 2010, however, that number more than quintupled.

The amount of money raised by Bachmann was certainly more than she would ever need to win the race against Clark in the 6th, and the upcoming FEC filings will likely show a significant amount of money left in her campaign warchest.

After all – how much money does one need to reach the less than 150,000 voters Bachmann needed to win on Tuesday?

And despite a record $16+ million raised by all candidates vying to represent the 6th District in the 2010 election cycle, the number of people voting in the 6th CD was virtually identical to the last midterm in 2006.

In 2006, a total of 302,188 voters cast their ballot in the race featuring Bachmann, DFLer Patty Wetterling, and IP candidate John Binkowski.

Despite the increased attention on the 6th CD race this year, Smart Politics projected last July that there would be no substantial increase in turnout in the 6th CD, predicting 305,711 voters in the 2010 6th CD race.