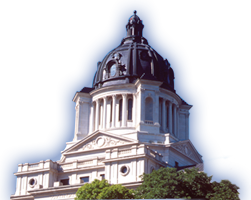 Not only did their brightest star, Blue Dog Democrat Stephanie Herseth Sandlin, narrowly lose her reelection bid for a fifth term against Republican Kristi Noem, but the Party’s already thin representation in the legislature was decimated. (Not to mention the fact Democrats failed to field a U.S. Senate candidate against John Thune for the first time in history).

The losses endured by the Democrats in the South Dakota House of Representatives were expected and not unusual.

Democratic membership of the 70-seat body dropped four seats from 24 to 20 – which has been the average number of seats won by the Party across the last seven election cycles in the House. (Smart Politics projected a loss of three seats).

On one other occasion Democrats equaled the GOP on Election Day, with each party winning 35 seats in the 1972 elections.

As strange as it may sound, the 20 seats won by the Democrats in the House (28.6 percent of the 70-seat chamber) is actually better than their historical average since the turn of the 20th Century.

But it is the losses Democrats suffered in the State Senate that particularly stung the Party on Tuesday.

That marks a loss of over half its delegation from the previous election cycle, when Democrats held 14 seats.

Smart Politics projected a loss of four seats for the Democrats, which would have left them with just 10 districts, or one more than the 40-year low of 9 seats won during the elections of 1982 and 2002.

But the losses were even worse than that.

Democrats have now reached their lowest level of representation in the Senate since the midterm elections of 1966 – another national wave year for the GOP.

In that cycle, Democrats fell from even greater heights – from the 16 districts won during the Democratic wave of 1964.

The losses by the Democrats in the Senate in 2010 and 2008 – a year in which the party hoped to gain districts (they lost one net seat) – are particularly brutal for a party trying to rebuild, as Democrats have had some success in Senate elections, especially when compared to their comrades in the House.

However, things could be worse for Senate Democrats in South Dakota.