Republicans have controlled the governor’s mansions of IA, MN, ND, SD, and WI for over 72 percent of the time since 1846

Although Democrats appear to have staved off a clean sweep by the Republican Party in Upper Midwestern gubernatorial contests by picking up a narrow victory in Minnesota (pending the ongoing recount), the loss of two other seats in Iowa and Wisconsin finds the five-state region settling back into a familiar historical pattern, when the GOP dominated the Upper Midwest for nearly a century through the 1950s.

A Smart Politics study of 311 Upper Midwestern gubernatorial elections finds that Republicans have been in power 72.3 percent of the time across Iowa, Minnesota, the Dakotas, and Wisconsin, with Democrats governing just 23.4 percent of the time, and other parties at 4.3 percent.

By the end of 2010, Republicans will have been in office for a collective 522 years and 4 months in the five-state region, compared to just 168 years and 11 months for Democrats, and 31 years and 1 month for other parties.

Partisan Control of Upper Midwestern Governorships by Length of Service

Republicans have had their greatest success in South Dakota – governing the Mount Rushmore State for 81.9 percent of the time (99 years, 10 months) during the 121+ years since statehood.

With the election of Dennis Daugaard in 2010, South Dakota will extend its longest-in-the-nation streak of consecutive Republican governors from 32 to 36 years, with the last Democrat elected in 1974 (Richard Kneip).

Democrats have been in power just 18 years in South Dakota (14.8 percent), with third parties running the executive branch for four years (3.3 percent).

The GOP has held Iowa’s governor’s office for 121 years and 1 month, or 73.8 percent of the time since statehood. 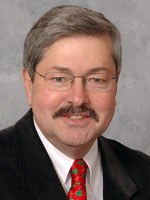 The election of former four-term GOP Governor Terry Branstad in 2010 ended a 12-year drought for the Republican Party by knocking one-term incumbent Chet Culver out of office.

The 12-year reign of Culver and his predecessor Tom Vilsack was the second longest gubernatorial stretch of Democratic control in the entire five-state region across the last 165 years.

Democrats have governed Iowa for 39 years and 11 months, or just 24.3 percent of the time, with other parties governing the state for 3 years and 1 month (1.9 percent).

Wisconsin voters – who return Republicans to power in 2011 with the election of Scott Walker in that state’s open seat race – have backed Republicans for the state’s chief executive office the third most in the region.

Republicans have governed Wisconsin for 118 years and 10 months, or 73.1 percent of the time since statehood in 1848.

Democrats have governed Wisconsin for only 37 years and 9 months, or 23.2 percent of the time, with other parties governing for a total of six years (3.7 percent).

Pending the result of the statewide recount, the nation’s third-longest Democratic gubernatorial drought will end in Minnesota with the election of DFLer Mark Dayton.

Republicans have governed Minnesota for 105 years and 5 months, or 69.1 percent of the time since statehood in 1858.

This nearly four decade hold on the state’s chief executive office is the longest across the five-state region over the last 165 years.

Democrats (or the DFL) have governed Minnesota for 33 years and 3 months, or 21.8 percent of the time, with third parties boasting a region-best 14 years in office (9.2 percent).

Although North Dakota will enter 2011 with the third longest Republican gubernatorial streak in the nation at 18+ years and counting, the Democratic Party has actually had its greatest regional success for governorships in the Peace Garden State.

Republicans have governed North Dakota for 77 years and 2 months, or 63.7 percent of the time since statehood in November 1889.

The election of William Guy (pictured) to four terms and Arthur Link to two terms during this span is the longest Democratic hold on the governor’s office in history for any state in the region.

Overall, as the table below demonstrates, Republicans have thoroughly dominated the region, holding a majority of governorships for more than 80 percent of the time since the Upper Midwest became a five-state region just over 121 years ago in 1889.

Since 1889, there have been more Republican governors than Democratic governors for 98 years and 2 months.

The first time Democrats outnumbered Republicans in the governor’s office in the five-state Upper Midwestern region was after the Election of 1932, when Democrats were elected in Iowa (Clyde Herring), South Dakota (Tom Berry), and Wisconsin (Albert Schmedeman).

The last time Democrats controlled a majority of governorships in the region was after the Election of 1984, when they won the gubernatorial contest in North Dakota (George Sinner) after previously winning in 1982 in Minnesota (Rudy Perpich) and Wisconsin (Anthony Earl).

At least one Republican governor has been in office in the Upper Midwest since 1889 – save for a controversial one month period after the Election of 1934.

In that race, Democrats were elected in Iowa (Clyde Herring) and South Dakota (Tom Berry), with a Progressive winning in Wisconsin (Philip Fox La Follette) and a Farmer-Laborite in Minnesota (Floyd Olson).

Although a Democrat also won North Dakota (Thomas Moodie) – shutting out the GOP for the first time in the five state region that cycle – it was later determined he was ineligible to run for office, having not established proper residency requirements.

As a result, Republican Lieutenant Governor Walter Welford became governor, and at least one GOPer has governed in the region ever since.