It is sometimes said that politicians – particularly those who attain the highest levels of elected office like that of the presidency – have unusually large egos.

But when the President of the United States holds court before tens of millions of Americans in important speeches such as the State of the Union Address, it is usually in his best interest to check that ego at the podium, and talk about the nation, not himself.

One rhetorical device the president can employ to still get his message across and advocate his policies is to deliver those remarks utilizing first-person plural pronouns (e.g. we, us, our) rather than singular pronouns (e.g. I, me, mine, myself).

By doing so, the president’s language can strategically (even if superficially) frame his message as unifying the country, bridging political parties, and, most importantly, linking and identifying the president himself with the American people.

But not all presidents take the same approach when peppering their speech with plural versus singular first-person pronouns – and virtually none have taken it to the extent of Barack Obama, who nearly made (presidential) linguistic history last week.

A Smart Politics analysis of orally delivered State of the Union Addresses since Franklin Roosevelt’s first address in 1934 finds President Obama’s 2011 speech recorded the second largest percentage of first-personal plural pronouns out of nearly 70 such addresses.

That means more than 1 out of every 20 words delivered by Obama fell into the pronoun families of “we, our, and us.”

Obama’s 2011 State of the Union included: 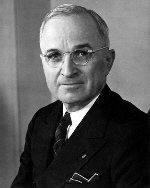 The only president over the past 77 years who delivered a State of the Union address with a larger percentage of first-person plural pronouns was Democrat Harry Truman in 1951 – in his first address after the onset of the Korean War.

In that address, Truman used 308 of these pronouns in his 3,989-word speech, or 7.72 percent of the address – nearly double the 3.88 percent presidential average over the past 75+ years.

Interestingly, each of the top six slots for State of the Union speeches with the most uses of “we, our, and us” are all held by Democrats.

Obama’s 2011 address is already noteworthy for recording the second lowest Flesch-Kincaid score out of the 69 oral State of the Union speeches since 1934.

Many conservatives criticized the President’s speech for coming up short on details in his discussion of the country’s big problems, such as how Obama will tackle the federal budget deficit and national debt, and how he plans to pay for the myriad of domestic policy programs that he advocated in his speech, such as education and infrastructure.

But while the President’s SOTU may have been thin on the mechanics of policy implementation, and comparatively simplistic in sentence length and word length, his speech was long on first-person plural pronouns, delivered strategically to signify his personal relationship with Americans.

For example, Obama interjected several of these pronouns right off the bat, in his introductory remarks on the first substantive policy area of his speech – the economy:

“We are poised for progress. Two years after the worst recession most of us have ever known, the stock market has come roaring back…But we have never measured progress by these yardsticks alone. We measure progress by the success of our people. By the prospects of a small business owner who dreams of turning a good idea into a thriving enterprise. By the opportunities for a better life that we pass on to our children.” (emphasis added)

The President continued to implement first-person plural pronouns in the very next section of his speech, this time to paint a picture of unification between Democrats and Republicans in D.C. and the need for bi-partisanship for the good of the nation:

“That’s the project the American people want us to work on. Together. We did that in December. Thanks to the tax cuts we passed, Americans’ paychecks are a little bigger today….But we have to do more. These steps we’ve taken over the last two years may have broken the back of this recession, but to win the future, we’ll need to take on challenges that have been decades in the making.”

And, of course, Obama delivered both of his signature lines of the evening employing these very same plural pronouns:

“This is our generation’s Sputnik moment.”

In only two other speeches since FDR has a president included a larger raw number of such pronouns in a State of the Union speech – although both of those speeches were more than 2,100 words longer than Obama’s: Bill Clinton in 1995 (415 such pronouns, ranked #13 by percentage) and 2000 (397, #21).

Table indicates the percentage of first-person plural pronouns (e.g. our, ours, ourself, ourselves, us, let’s, we, we’d, we’ll, we’re, we’ve) of the total words delivered in the address. Data compiled by Smart Politics. Excluded from analysis were five written addresses (by Truman in 1946 and 1953, Eisenhower in 1961, Nixon in 1973, and Carter in 1981) and two addresses that were delivered orally, but not by the President himself (Roosevelt in 1945, Eisenhower in 1956).

But if Obama’s 2011 State of the Union address was the President’s “unification” speech, it differs significantly from the one he delivered last year.

President Obama’s 2010 State of the Union Address was the seventh heaviest first-person singular pronoun-laden speech since FDR, with 1.66 percent of the address containing pronouns such as “me,” “myself,” and “I.”

For example, look at the contrast in Obama’s introductory remarks on the economy in 2010 compared to the passage quoted above, and notice how he took a decidedly different rhetorical approach:

“So I know the anxieties that are out there right now. They’re not new. These struggles are the reason I ran for president. These struggles are what I’ve witnessed for years in places like Elkhart, Indiana. Galesburg, Illinois. I hear about them in the letters that I read each night.”

As well as when he tackled his pet project of health care reform:

“I didn’t choose to tackle this issue to get some legislative victory under my belt. And by now it should be fairly obvious that I didn’t take on health care because it was good politics. I took on health care because of the stories I’ve heard from Americans with pre-existing conditions whose lives depend on getting coverage…“

But in his 2011 Address – coming off an election two and a half months prior which saw a rebuke of the President’s policies and the Democratic Party in a GOP landslide at the ballot box – Obama backed off dramatically from these first-person singular pronouns, cutting the total number by nearly half: from 120 in 2010 to just 73 this year (or just 1.06 percent of his speech).

And while Obama’s 2011 Address still recorded the 24th largest percentage use of “me, myself, and I’s” since FDR, it was only slightly above the 1.00 percent average across the last 13 presidents.

Table indicates the percentage of first-person plural pronouns (e.g. I, I’d, I’ll, I’m, I’ve, me, mine, my, myself) of the total words delivered in the address. Data compiled by Smart Politics. Excluded from analysis were five written addresses (by Truman in 1946 and 1953, Eisenhower in 1961, Nixon in 1973, and Carter in 1981) and two addresses that were delivered orally, but not by the President himself (Roosevelt in 1945, Eisenhower in 1956).

Overall, when examining the ratio of first-person plural vs. singular pronouns across all State of the Union addresses delivered by each respective president, Obama ranks just 8th out of 13, with 3.50 plural pronouns for every singular pronoun in his two speeches.

Gerald Ford’s language was the most self-referential, with just 1.89 first-person plural pronouns for every 1 singular pronoun spoken.

Data compiled by Smart Politics. Excluded from analysis were five written addresses (by Truman in 1946 and 1953, Eisenhower in 1961, Nixon in 1973, and Carter in 1981) and two addresses that were delivered orally, but not by the President himself (Roosevelt in 1945, Eisenhower in 1956).