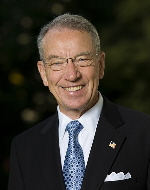 With Republican Chuck Grassley’s election to a sixth term last November, the Iowa U.S. Senate delegation of Grassley and Democrat Tom Harkin are beginning to pass some prominent names on a rarefied list.

Grassley and Harkin have now served together in the U.S. Senate for 26.1 years, which is not simply the longest current streak in the nation’s upper legislative chamber, but one of the longest in U.S. history.

A Smart Politics review of U.S. Senate biographical data finds that Chuck Grassley and Tom Harkin have notched the ninth longest period of consecutive service for a statewide Senate delegation overall, and the third longest stretch ever recorded for Senators from different political parties.

Only South Carolina’s Strom Thurmond and Ernest Hollings (1966-2003) and Delaware’s William Roth and Joe Biden (1973-2001) have eclipsed the Grassley-Harkin split-party delegation mark in over 220 years of U.S. Senate history.

Thurmond and Hollings notched 36.2 years of consecutive service before Thurmond’s death in 2003 while Roth and Biden put in 28 years together before Roth was defeated by current Delaware Senator Tom Carper in 2000.

Grassley and Harkin will pass Roth and Biden in January of 2013 for second place on the all-time U.S. Senate ‘strange bedfellows’ list.

With the commencement of the 112th Congress, the Iowa twosome recently passed up Democrat Jeff Bingaman and former Republican Senator Pete Domenici of New Mexico, who recorded 26 years of consecutive service together from 1983-2009.

Once Harkin finishes his fifth term in January 2015, the duo will have ascended from their current 9th position overall to the third longest period of joint service in U.S. Senate history at 30 years.

Harkin would be 75 years old at that time while Grassley would be 81.

Altogether, of the nearly 2,000 men and women who have served in the Senate since it first convened in 1789, only 28 state delegation pairs have served together for at least 20 years.

Aside from Grassley and Harkin, the only other current pair of Senators from the same state who have eclipsed the 20-year mark of serving together in the Senate are Hawaii Democrats Daniel Inouye and Daniel Akaka (ranking #24 at 20.8 years and counting).

And how have the remaining Top 28 twosomes ended in history?

· Three were defeated in the general election: Delaware’s William Roth in 2000 (with Joe Biden), Washington’s Warren Magnuson in 1980 (with Scoop Jackson), and Wyoming’s Clarence Clark in 1916 (with Francis Warren).

· Another two veteran Senators lost the bid for their party’s renomination: New Jersey’s Clifford Case in 1978 (with Harrison Williams) and Arkansas’s J. William Fulbright in 1974 (with John McClellan).

The political longevity of Grassley and Harkin is a testament to the Hawkeye State’s true battleground state status. (Democratic and Republican presidential nominees have split the last 12 elections in Iowa at six victories for each party).

For example, the voting record of neither Senator in recent years has even flirted with the political center, and yet each has cruised to reelection victory.

Next on the list for the Iowa delegation: passing up Oregon’s Mark Hatfield and Bob Packwood for 8th place on the all-time list in October of this year.