When Google changed their search term process to include an “autocomplete” algorithm, it may have introduced a time-saving process, but it has perhaps also more firmly entrenched controversial statements made by politicians in the public discourse.

The autocomplete feature offers top search results that might be similar to the one in which a user is interested, and works thusly, from Google’s site:

“As you type, Google’s algorithm predicts and displays search queries based on other users’ search activities. These searches are algorithmically determined based on a number of purely objective factors (including popularity of search terms) without human intervention. All of the predicted queries shown have been typed previously by Google users. The autocomplete dataset is updated frequently to offer fresh and rising search queries. In addition, if you’re signed in to your Google Account and have Web History enabled, you may see search queries from relevant searches that you’ve done in the past.”

A Smart Politics study utilized Google’s autocomplete function in an analysis of what top queries are generated after typing in the full first and last names of each of the nation’s 50 governors.

The top Google autocomplete results for most governors fall into one of approximately a half-dozen categories.

Another seven governors generated “State of the State” – an autocomplete query that will probably fall out of the top spot as the calendar gets further removed from the beginning of the year when such addresses were delivered.

McDonnell had released a comprehensive statewide transportation plan on his website during his 2009 campaign.

(Though “John Lynch” actually returned a Wiki index page as there have been other prominent individuals with the same name (e.g. the former Tampa Bay Buccaneer)).

Kentucky’s Steve Beshear came back with the phrase, “For Governor.”

The Democratic incumbent will be on the ballot this November as he tries to win a second term in the Republican-leaning state.

As a result, Beshear has a very active campaign website.

Indiana Governor Mitch Daniels – one of the rumored and buzzworthy 2012 Republican presidential candidates – returned a top autocomplete query of “PAC.”

Schweitzer gave a rousing speech at the 2008 Democratic National Convention. The governor is term-limited and will not be on the Montana gubernatorial ballot in 2012.

The remaining nine governors returned autcomplete results wholly unique to their particular situations (and, for some, controversies).

On the innocuous side, Louisiana Governor Bobby Jindal’s first autosuggestion was “book” – in reference to Leadership and Crisis – a book he authored that hit the market in late 2010.

Missouri’s Democratic governor Jay Nixon returned “assassination.” This autocomplete query is in reference to a September 2010 reported attempt on Nixon’s life when a college student slashed the throat of the Dean at Metropolitan Community College – mistaking the dean for Nixon.

Reports came out early in Abercrombie’s term in mid-January that suggested he could not find the birth record in the files at the Hawaii Department of Health.

Oregon’s Democratic Governor, John Kitzhaber, produces an autocomplete query of “girlfriend” at the top of his list.

Republican Governor Scott Walker of Wisconsin, who has been the most covered governor in the country in 2011, does not have “labor” or “union” as his top autosuggestion, but instead “prank call.”

Walker was duped by a journalist posing as a Republican contributor in a 20-minute conversation two weeks ago – with audio files circulating to numerous websites on the Internet.

Brewer received media coverage a few months ago when it was reported that her decision to cut state health care benefits resulted in the death of a patient at Tuscon University Medical Center who did not receive a liver transplant after being dropped from a waiting list.

As a result Brewer’s top autocomplete query is “death panel.” 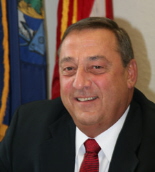 Newly-elected Paul LePage of Maine stirred up controversy in January around Martin Luther King Day and, as a result, “NAACP” is his first query result.

LePage told a meeting of business leaders in January that he would not meet with the NAACP because they are a special interest group.

When asked whether his refusal to meet with the group would be seen as a racial issue, he said, “”Tell ’em to kiss my butt. If they want to play the race card, come to dinner and my son will talk to them.”

LePage’s adopted son was born in Jamaica and is black.

First-term Governor Nathan Deal of Georgia has the unfortunate term “Nazi” come up as his first autocomplete query, after an Atlanta (Spanish-language) newspaper published a doctored photo of the Republican that depicted him in a Nazi uniform with a Hitler mustache.

Deal has angered some in the Hispanic community for his anti-illegal immigration policy views.

Barbour made controversial comments in late 2010 about his childhood recollections of the segregationist Citizens’ Council of America, stating “I just don’t remember it as being that bad.”

As a result of this gaffe, “racism” is currently the first autocomplete suggestion after typing in Haley Barbour’s name.

Of course, Google autocomplete and search results are fluid and subject to change as real world events and new controversies spark interest on the Internet.