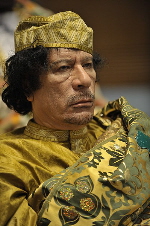 When sanctions were lifted against Libya by George W. Bush in 2004 in an Executive Order, the primary selling point was that its government and ruler Muammar Ghadafi were making efforts to rejoin the international community by agreeing to abandon its pursuit and production of weapons of mass destruction and disclose the location of its WMD materials and stockpiles.

In short, with diplomatic relations normalized a few months prior, the President believed the national emergency and threat to the United States from Libya was over, although it retained its designated status as a state sponsor of terrorism.

In Bush’s September 20, 2004 Message to the Congress on Termination of the National Emergency With Respect to Libya, he wrote:

“Based on Libya’s recent commitments and actions to implement its December 19, 2003, commitment to eliminate its weapons of mass destruction programs and its MTCR-class missiles, and other developments, I have determined that the situation that gave rise to the national emergency declared in Executive Order 12543 has been significantly altered. My order, therefore, terminates that national emergency with respect to Libya and revokes Executive Orders 12543, 12544, and 12801, and lifts the trade, commercial, and travel sanctions imposed against Libya based on that national emergency. The order also revokes Executive Order 12538, which blocked the import of petroleum products refined in Libya into the United States.”

But among the reasons stated by President Barack Obama over the last few weeks as to why the unrest in Libya must be confronted by the United States is the violent history associated with Ghadafi’s regime and its support of terrorism:

“For decades, he has demonstrated a willingness to use brute force through his sponsorship of terrorism against the American people as well as others, and through the killings that he has carried out within his own borders.” – President Barack Obama, March 18, 2011

Indeed, several reports have surfaced that suggest a desperate, cornered Ghadafi might use WMDs against his own people and that Libya still has significant WMD stockpiles, or key ingredients for their production, such as 1,000 tons of yellow cake uranium, several hundred tons of chemical weapon materials, and 10 tons of chemicals to produce mustard gas.

Contrast that with an April 13, 2004 news conference, when President Bush spoke of Colonel Ghadafi making the world “safer” as a result of his disclosure of the location of 50 tons of mustard gas.

So, was the U.S. and world community hoodwinked by Ghadafi for all these years – interpreting his gestures of cooperation that he would no longer be a destabilizing force in the region and was on his way to making Libya a productive member of the international community?

You be the judge:

“We look forward to Libya being a very viable part of our portfolio of ’04.” – Haliburton Senior Vice President of Global Operations David King, September 23, 2004, Analyst and Investor Meeting

“Libya has the potential to move from one of the most destabilizing forces in that region to an actual stabilizing force. You could see it happening.” – National Security Adviser Condoleezza Rice, October 23, 2004, interview with Pittsburgh Tribune Review

“We must be willing to create and seize opportunities. Libya’s rapid transformation from a danger to a rehabilitating member of the international community is a stunning example.” – Secretary of State Colin Powell, December 8, 2004, remarks at the German Marshall Fund’s Transatlantic Center

“He has been somewhat born again.” – Senator Mitch McConnell (R-KY), March 25, 2004, remarks on U.S. Senate floor on the transformation of Colonel Ghadafi and the situation in Libya

“The change of his politics is really remarkable.” – German Chancellor Gerhard Schroeder, October 16, 2004, after visiting Colonel Ghadafi in Libya

“While more remains to be done, Libya’s actions have been serious, credible, and consistent with Colonel Qadhafi’s public declaration that Libya seeks to play a role in building a new world free from WMD and from all forms of terrorism.” – Scott McClellan, White House Press Secretary, February 26, 2004

“Libya was a threat. Libya’s now peacefully dismantling its weapons programs. Libya understood that America and others will enforce doctrine. And the world is better for it.” – President George W. Bush, September 30, 2004, Presidential Debate

“Colonel Qadhafi finally got it, as I can testify, since I met with him last week again. He finally saw his policies of terror and possession of chemical, biological and nuclear weapons programs was a mistake… Libya took the right path toward integration and cooperation with the world of civilized nation.” – late Congressman Tom Lantos (D-CA), August 24, 2004, House International Relations Committee Hearing

“They worked in the case of Libya.” – Henry Kissinger, former Secretary of State, May 17, 2004, on CNNfn in response to host Lou Dobbs’ challenge to document an instance in which economic sanctions have worked against state sponsors of terrorism

Less than seven years after these assessments were made about Libya and its dictator, the United States and its allies began strikes on Libyan air defenses and ground troops in Operation Odyssey Dawn.