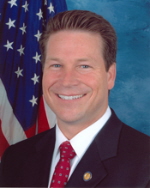 Four-term Republican U.S. Representative Connie Mack IV is expected to make a major announcement on his candidacy Friday morning for the race to unseat Florida Democratic Senator Bill Nelson in 2012.

While Mack may be viewed as having the inside track for the Republican nomination among those who have declared their candidacies thus far, Florida electoral history suggests the congressman would be far from a favorite to win the seat.

A Smart Politics analysis finds only 2 of 15 Florida U.S. Representatives have launched successful U.S. Senate candidacies since 1970 (13 percent), and just 4 of 19 since popular vote elections were introduced a century ago (21 percent).

On top of that, only one such Representative was able to defeat a sitting incumbent Senator – some 60+ years ago (George Smathers in 1950).

Of course, one could not blame Mack for being optimistic about his chances to be the next Senator from the Sunshine State.

And that is because one of the few U.S. Representatives who successfully upgraded his political resume from Representative to Senator was Mack’s own father, Connie Mack III.

Mack III had served three terms from Florida’s 13th congressional district before running for the Senate in 1988. Mack won that race – by 0.9 points over Congressman Buddy MacKay – to claim Lawton Chiles’ open seat.

But while Connie Mack IV would certainly benefit from his well-known surname, he also faces a legacy of U.S. Senate campaign trails in Florida littered with defeated former Representatives over the years.

In fact, the only two successful candidacies by Representatives over the past 40 years have occurred in open seat races – Connie Mack III in 1988 and Bill Nelson in 2000 – a luxury the GOP nominee will not enjoy in 2012.

The list of failed candidacies by former U.S. Representatives over the last four decades is much more extensive:

· In 1980, Gunter ran again, losing this time in the general election by 3.3 points to Republican Paula Hawkins.

· Also in 1988, five-term Democratic U.S. House member Dan Mica lost his party’s nomination (to MacKay) as did Gunter in a runoff.

· In 2000, 10-term GOP Representative Bill McCollum made the first of his two failed U.S. Senate bids, losing by 4.9 points to Bill Nelson.

· In 2004, McCollum returned to the campaign trail, but failed to receive the GOP nod in an election eventually won by Republican nominee Mel Martinez.

· In 2006, Nelson won his second term in the Senate by defeating two-term Republican Representative Katherine Harris by 22.2 points.

With 15 attempts in just 40 years, U.S. House members from Florida seem to be making a habit out of running for the nation’s upper legislative chamber – despite such limited success.

Contrast that with the mere four U.S. Senate candidacies by House members during the 54-year stretch from 1914 to 1968:

Smathers’ win is the only example in Florida history in which a Representative from the Sunshine State won a U.S. Senate race with a sitting incumbent up for election.

· In 1968, in an open-seat race to replace the retiring Smathers, three-term Republican Representative Edward Gurney was victorious by 11.8 points over Democrat LeRoy Collins.

Of course, Representative Mack would have to outlast several other GOP hopefuls in order to even get the opportunity to upset Nelson in November 2012.