Only 1 pair of 101 Republican U.S. Representatives serving in a redistricting cycle has squared off in a renomination battle in Iowa history; it has never happened on the Democratic side

The non-partisan agency’s map – collapsing the state’s five districts into four due to reapportionment – would potentially pit two pairs of same-party incumbents against one another in 2012 primary races: Republicans Tom Latham and Steve King (in the proposed 4th CD) and Democrats Dave Loebsack and Bruce Braley (in the new 1st CD).

While the Iowa legislature and governor would need to approve this plan for it to take effect, even if it is rejected it does not mean the next map won’t also house intra-party incumbents in the same districts. (Among other variables, the LSA is not allowed to consider the place of residence of U.S. Representatives).

Which brings us to the very real possibility that Iowans may witness a Latham vs. King and/or Loebsack vs. Braley matchup in the Hawkeye State’s primary – slated to be held in early June 2012.

And how rare of an event would this be in Iowa politics?

A Smart Politics study finds that only one pair out of 101 Iowa Republican U.S. Representatives in office during redistricting years has squared off in a renomination battle since statehood.

On the Democratic side, none of the 19 incumbents that have been in office in redistricting years have ever faced a fellow U.S. Representative from their own party in a nomination battle.

Since the formation of the Republican Party in the mid-1850s, there have been 101 Republican U.S. House members from Iowa who were in office at the time new district lines went into effect (every 10 years from 1862 through 2002).

A total of 88 of these GOP Representatives ran for reelection, while 13 opted to retire from their seat.

Of the 88 that ran, 76 were reelected to Congress, 10 lost in the general election, and two did not receive their party’s nomination.

Only one of these two who lost their renomination bid did so against another Republican incumbent – C. William Ramseyer.

Ramseyer was a nine-term incumbent from Iowa’s 6th CD heading into the 1932 cycle when the Hawkeye State lost two of its 11 seats.

The state’s new nine congressional district map found Ramseyer paired up with another Republican incumbent (the state had elected 10 of 11 GOPers in 1930) – four-term Congressman Lloyd Thurston from the 8th CD.

Ramseyer and Thurston both vied for the Republican nomination in the newly-drawn 5th CD with Thurston ultimately receiving the nomination and narrowly winning the general election by 633 votes over Democratic challenger Lloyd Ellis.

If King and Latham are eventually paired up in the same congressional district in 2012 – and both seek reelection – it will mark only the second time this has occurred in 150+ years of Iowa Republican politics.

This does not mean, however, that other Republican pairs have not occasionally seen their districts merge in the past – simply that on only one occasion did neither U.S. Representative bow out (in 1932). 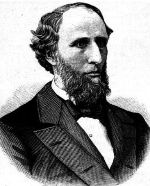 For example, in 1882, three-term Republican Nathaniel Deering from the 4th CD saw his district redrawn to include 3rd CD GOP Representative Thomas Updegraff.

According to the 1883 Congressional Directory, Deering ultimately declined to seek renomination, though Updegraff went on to lose to Democratic-Greenback nominee Luman Weller in the general election.

The only other time a sitting Republican incumbent lost his party’s nomination in a redistricting year was in 1872 when one-term Congressman Madison Walden was challenged by former Republican U.S. Representative William Loughridge.

In 1870, Walden had snatched the nomination away from Loughridge in the 4th CD, but Loughridge got his revenge in 1872 in the newly-drawn 6th CD. (Loughridge also won the general election race later that year).

Iowa Republican U.S. Representatives Who Did Not Return to Congress in Redistricting Cycles Since Statehood

Throughout Iowa’s political history, Republicans have dominated congressional elections – winning 81 percent of the more than 650 general and special election contests that have been held since statehood.

As a result, on the Democratic side, only 19 U.S. Representatives have been in office during redistricting cycles in the history of the Hawkeye State.

Of these 19 representatives, 18 ran for reelection while just one did not (three-term Congressman Merwin Coad in 1962).

If David Loebsack and Bruce Braley ultimately face off in a Democratic primary in 2012, it will therefore be the first time in Iowa Democratic Party history that two sitting Democratic U.S. Representatives vie for the same seat.

And thus while Republicans in the Iowa legislature may not be thrilled to sign off on a redistricting plan that pits King against Latham, they can at least be assured under this first plan the Democratic Party will at least lose one incumbent come January 2013.