The California GOP has not picked up a Democratic held U.S. House seat in general or special elections since 1998 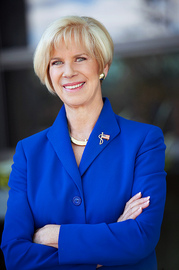 Democrat Janice Hahn’s special election victory over Craig Huey in California’s 36th Congressional District Tuesday evening continues a more than decade long string of futility on the part of California Republicans in their attempt to pick up a Democratic held U.S. House seat.

A Smart Politics historical review of California election returns finds that Democrats have now successfully held 200 consecutive seats in general and special elections conducted after the Election of 1998.

Although Hahn was criticized by some for running a traditional campaign in a non-traditional election year and matchup, she was able to notch a 9.1-point victory over the conservative businessman who surprised many by eking out a second place finish in May in the heavily Democratic district.

The 36th CD has been vacant since late February when nine-term Democrat Jane Harman resigned to head the Woodrow Wilson International Center for Scholars.

But while the Republicans are currently suffering through a 0-200 stretch in pick up attempts, Democrats have won seven GOP-held seats in the Golden State out of 125 general and special election matchups during this 13-year period, or a 6 percent pick-up rate.

Californians are now making up a larger and larger percentage of the Democratic caucus in Congress – currently resting at 18 percent (34 of 193 members), which marks the largest percentage in the history of the state.

Last November, a Smart Politics report of the last 81 election cycles dating back to 1850 found the Democratic Party was also comprised of a larger percentage of Californians and New Yorkers in the U.S. House than at any point since California joined the Union, at more than 28 percent.

The last time California Republicans won a Democratic-held House seat was when they picked off the 3rd and 36th CDs in November 1998.

Harman then defeated Kuykendall by less than 5,000 votes in 2000 to win back her seat en route to six consecutive victories.

Aside from the two GOP victories in 1998, the only other Republican pick-up in a California U.S. House race since the 1994 Republican Revolution was a 1995 special election victory in the state’s 15th CD by Tom Campbell after the resignation of Norman Mineta.