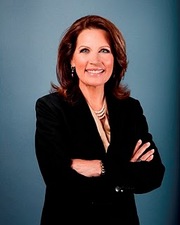 But it should not be too surprising that the Lakeland, Minnesota billionaire would turn so quickly to the Bachmann camp now that Pawlenty is out of the race.

Nor should much be made of any financial support he puts in her coffers going forward.

A Smart Politics review of FEC fundraising data finds Stanley Hubbard and his wife Karen gave significant contributions to Michele Bachmann’s congressional campaigns in the 2006, 2008, and 2010 cycles, with $25,000 in donations during this three-cycle span.

But the Hubbards – like many über wealthy individuals, and particularly those with business interests – spread their wealth around, across candidates and parties.

The duo have contributed to numerous federal campaigns over the past decade, including many competitors from the same party vying for the same office, as well as to dozens of Democrats.

For example, in the 2008 presidential election, Stanley Hubbard donated to the campaigns of Republicans Mitt Romney, Rudy Giuliani, and John McCain as well as Democratic candidate Bill Richardson.

Stanley Hubbard even gave $1,000 to Al Gore during his 2000 presidential campaign.

In Minnesota’s 2008 3rd CD contest, both DFLer Terri Bonoff and Republican Erik Paulsen each received money from the media mogul as they sought to win Jim Ramstad’s seat.

But the Hubbards have had a Republican tilt in their campaign contributions.

Still, over the past decade the Hubbards have also donated to dozens of Democratic candidates, including:

So while the Bachmann campaign may appreciate the public backing Stanley Hubbard has given her campaign, scratching the surface of the mogul’s past campaign contributions suggests his funding is more about getting access to candidates across the political spectrum and less about any individual candidate’s political party or ideology.