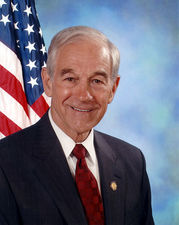 With Ron Paul netting $1.8 million in a 24-hour money bomb on his birthday last weekend, the Texas U.S. Representative and Republican presidential candidate appears poised to rank in the upper echelons for fundraising in the large GOP field by the end of the third quarter.

Paul was also able to raise a substantial amount of money during his 2008 White House bid with more than $34 million.

The difference in this cycle is that Paul is polling at a much higher clip right out of the gate.

One thing that hasn’t changed much from four years ago, however, is where Paul’s deepest pockets of support lie for large donor giving to his campaign.

A Smart Politics study of contributions to Ron Paul’s 2008 and 2012 presidential campaigns finds that the same four states lead the pack in large donor per capita individual giving in both cycles: Wyoming, New Hampshire, Nevada, and Alaska.

As with the 2008 cycle, Paul is raising approximately half of his money in his 2012 campaign from individual donations of $200 or more (through Q2 2011 numbers provided by the FEC).

With its ‘Live Free or Die’ motto, New Hampshire fittingly was the leading per capita supporter of Paul’s 2008 campaign at $17,337 per 100,000 residents in large donor contributions – a 31 percent higher clip than the second place state Wyoming at $13,241.

Paul finished a distant fifth in the New Hampshire primary in 2008 at 7.7 percent, and is currently polling just north of that with approximately five months until its 2012 primary.

This time around, New Hampshire is coming in at a close second to Wyoming in early per capita giving to Paul’s 2012 campaign, with the Equality State edging the Granite State $2,682 to $2,506 per 100,000 residents.

Paul’s appeal in Western states – where libertarian streaks are more pronounced – is quite evident.

Several of the Top 10 states in early per capita giving to Paul for the 2012 cycle are out west:

The Hawkeye State is the only Midwestern state to crack the Top 15 among per capita donors to Paul’s campaign, and only one of two states from the region to make the Top 25 (with North Dakota at #19).

* Through Q2 2011. Table compiled by Smart Politics from FEC data.