Reagan’s name was mentioned 24 times by the GOP presidential candidates, but not once by Romney 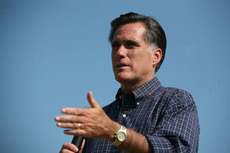 Wednesday evening’s presidential debate was held at his library, and his name was invoked two dozens times by Republican hopefuls on issues related to immigration, trade policy, isolationism, taxes and spending, and jobs.

But the name of the nation’s 40th president failed to pass the lips of one candidate on the nationally televised stage: Mitt Romney.

A Smart Politics content analysis of the 2012 GOP presidential debates finds that not only was Mitt Romney the only candidate who did not name drop Reagan at the MSNBC / POLITICO debate, but he has also refrained from invoking the legendary Republican figure at all three major debates held so far this year.

Romney’s silence on Reagan – particularly in the library that bears his name – was in stark contrast to former House Speaker Newt Gingrich, who mentioned Reagan’s name nine times – more than twice the number of any other candidate.

In total, Reagan was name-dropped 24 times by the candidates Wednesday evening.

After Gingrich at nine mentions came Rick Santorum and Ron Paul with four, Jon Huntsman with three, Michele Bachmann with two, and Herman Cain and Rick Perry with one each.

Gingrich has now mentioned Ronald Reagan 14 times across the three debates held in New Hampshire, Iowa, and California with his affinity perhaps summed up in his shared view with the former president on immigration: “I’m with Ronald Reagan.”

Gingrich’s tally nearly equals the total number of times all other candidates (including former contender Tim Pawlenty) have cited Reagan’s name combined during these three debates (17).

Most invocations of Reagan on Wednesday were made in an attempt to bolster policy positions being advanced by the particular 2012 candidate, such as this passage by Santorum against isolationism:

“The bottom line is, Ronald Reagan was committed to America being a force for good around the world.”

Or this line by Gingrich on the economy:

“Speaking of letters, I was more interested in the one that you wrote to Ronald Reagan back and said I’m going to quit the party because of the things you believe in.”

Later in the debate Paul himself gave a veiled attack on the Reagan administration:

“But in the 1980s, we spent too much, we taxed too much, we built up our deficits, and it was a bad scene. Therefore, I support the message of Ronald Reagan. The message was great. But the consequence, we have to be honest with ourselves. It was not all that great.”

Below is a list of every time Ronald Reagan was referred to by the GOP field on Wednesday:

“I served during the Reagan campaign with people like Jack Kemp and Art Laffer. We had an idea for job creation. I served as a freshman — or as a sophomore helping pass the Reagan’s jobs program…The fact is, if you took the peak of the Reagan unemployment, which he inherited from Carter, by last Friday, going month by month, under Ronald Reagan, we’d have 3,700,000 more Americans working…The fact that President Obama doesn’t come to the Reagan Library to try to figure out how to create jobs, doesn’t talk to any of these three governors to learn how to create jobs, doesn’t talk to Herman Cain to learn how to create jobs tells you that this is a president so committed to class warfare and so committed to bureaucratic socialism that he can’t possibly be effective in jobs.”

“The Ronald Reagan technique put 3,700,000 more people back to work as of last Friday.”

“And I’d have to say, Mitt, now is not the time in a recession to enter a trade war. Ronald Reagan flew this plane. I was in China during the trip in 1984. He went on TV, he spoke to the Chinese people — I’d love to do that too, in Chinese itself — and he talked in optimistic, glowing terms.”

“President Reagan, when he made his decision back in 1987, he saw this as a human issue. And I hope that all of us, as we deal with this immigration issue, will always see it as an issue that resolves around real human beings…If President Reagan were here, he would speak to the American people and he would lay out in hopeful, optimistic terms how we can get there, remembering full well that we’re dealing with human beings here.”

“Well, we’re in the Reagan Library, and I’m hearing from at least a couple of people on this panel a very isolationist view of where the Republican Party should be headed about pulling troops out with Governor Huntsman and with Ron Paul. The bottom line is, Ronald Reagan was committed to America being a force for good around the world…, but this president was indecisive and confused from the very beginning. He only went along with the Libyan mission because the United Nations told him to, which is something that Ronald Reagan would have melted like the old Wicked Witch of the West before he would have allowed that to happen… This is a very important issue for our party. Are we going to stand in the Reagan tradition, or are we going to go the isolationist view that some in this party are advocating?”

“If the recovery that this administration claims would just tie for last place, we would have another 6 million jobs. If it would tie for the recovery that took place in the ’80s under President Reagan, we’d have 12 million more jobs out there, which would be music to the ears of the 14 million people looking for jobs.”

“I strongly supported Ronald Reagan. I was one of four in Texas — one of four members of Congress that supported Reagan in ’76. And I supported him all along, and I supported his — his — all his issues and all his programs. But in the 1980s, we spent too much, we taxed too much, we built up our deficits, and it was a bad scene. Therefore, I support the message of Ronald Reagan. The message was great. But the consequence, we have to be honest with ourselves. It was not all that great. Huge deficits during the 1980s, and that is what my criticism was for, not for Ronald Reagan’s message. His message is a great message.”

(To Ron Paul) “Speaking of letters, I was more interested in the one that you wrote to Ronald Reagan back and said I’m going to quit the party because of the things you believe in.”