Democrats and Republicans have each won 45 U.S. House races in the Silver State since 1864 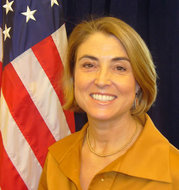 As reported by Smart Politics last April, Nevada is the second to last state to hold a special election for the U.S. House of Representatives, with Idaho the last remaining state after Nevada’s 2nd CD contest is conducted Tuesday to fill Republican Dean Heller’s vacancy.

Nevada is considered one of a handful of true battleground states in the 2012 presidential election, and the Silver State has certainly flown its purple stripes (or at least toggled back and forth between red and blue) over the decades.

For example, since the Election of 1880, Nevada has voted for 16 Democratic presidential candidates and 16 Republican nominees (plus one third party candidate in 1892).

Nevadans have also elected nearly an identical number of Democratic (18) governors and Republican (16) governors since statehood (as well as four from third parties).

And coming back full circle to Tuesday’s election, Nevadans have also sent to Washington, D.C. an equal number of Democratic U.S. House nominees as they have Republicans – at 45 each (plus another five third party nominees).

The special election contest, between Republican party chairman and former State Senator Mark Amodei, two-term Democratic State Treasurer Kate Marshall (pictured), Independent American Party candidate Timothy Fasano, and independent Helmuth Lehmann, seems poised to remain in the GOP column as it has for all previous 15 contests since the 2nd CD was created after the 1980 Census.

Democrats were also victorious in 31 of 60 at-large contests with Republicans winning 24, and the Silver Party five in the late 19th Century.

That all adds up to a 45-45 draw between Democrats and the GOP across the 95 U.S. House elections conducted since statehood in 1864.

The closest a Democrat has come to winning the 2nd CD over the past 30 years through its three different configurations is 4.6 points after redistricting in 1992 when Barabara Vucanovich won her sixth term over Democrat Pete Sferrazza.

The only other Democrat to come within single digits of a Republican in the 2nd CD is Jill Talbot Derby in 2006 in the open seat race won by Dean Heller by 5.4 points.

Republicans have won the district by an average of 28.5 points over the last three decades including a 72.7-point victory in 1998 when the Democratic Party failed to field a candidate in the race.