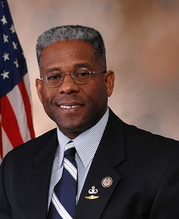 While nearly eight-dozen new members entered the U.S. House of Representatives in January, only a choice few have become media darlings (or fodder) nearly nine months into their first year in office.

In fact, three Republicans have received more than one-third of the coverage of the entire Class of 2010.

And two of these are the GOP’s only black Americans in Congress.

(Note: Lexis/Nexis transcripts cover most news programs on the cable TV networks, but not all morning and early afternoon programming (e.g. MSNBC)).

Representative West has been interviewed or mentioned in 222 news programs since January of this year – by far the most of the freshman class.

That accounts for 17.9 percent of broadcasts in which any House freshman has been mentioned on these networks.

Representatives West and Scott are the only two black Americans in the Republican Party serving in either chamber in the 112th Congress.

While Scott did not join the Congressional Black Caucus, West is a member, though he has been critical of late of some of the statements made by Democratic CBC members against the Tea Party, such as Maxine Waters who recently said the Tea Party can go “straight to hell” last month and Andre Carson who said the Tea Party wants blacks “hanging on a tree.”

West’s coverage also spiked earlier in the summer when an email he sent to fellow Florida U.S. Representative (and DNC Chairwoman) Debbie Wasserman-Schultz was made public in which he scolded her for not being a lady and called her “the most vile, unprofessional, and despicable member of the US House of Representatives.”

Representative West has been mentioned in an astounding 29 percent of all broadcasts on FOX in which a Freshman was interviewed or his or her name was cited.

Representative Walsh, meanwhile, bested West for the most coverage on CNN (61 to 36) and MSNBC (39 to 34) – with a good share of it negative.

Walsh, one of the more outspoken members of the Republican freshman class, has been embroiled in a few controversies during his first year in office.

For example, in late July, Walsh’s ex-wife sued him for $117,000 in unpaid child support and interest in Cook County Circuit Court, with the trial judge admonishing him in a preliminary ruling last week.

Walsh also received attention this month for announcing his boycott of President Obama’s economic address to a Joint Session of Congress, calling the speech “political theater.”

Not surprisingly, Republican freshmen in the House have made a much bigger proportional footprint in the media than their Democratic counterparts, wielding more power as the majority party as well as frequently making headlines by opposing President Obama’s agenda.

The approximately seven-dozen GOP House freshmen have appeared or been mentioned in an average of 14 news broadcasts each, compared to just eight mentions for the nine new Democrats, who are led by Karen Bass of California’s 33rd CD (tied at #11).

The differences were not so pronounced between newly-elected men (13 broadcasts) versus women (11 broadcasts), with South Dakota at-large Representative Kristi Noem setting the pace for the latter at #7 with 25 broadcasts mentioning her name followed by Bass at #11 with 18, and Republicans Nan Hayworth (NY-19) and Renee Elmers (NC-02) at #13 with 17.

And which representatives are receiving no love (or hate) on the airwaves so far in 2011?

Democratic at-large congressman John Carney is the only freshman yet to be mentioned once on these broadcast networks (for the programs tracked by Lexis/Nexis). Carney, the former Lieutenant Governor of Delaware, sits on the Financial Services Committee.

Broadcast mentions through September 17, 2011 from transcripts on Lexis/Nexis of ABC, CBS, CNN, FOX, MSNBC, and NPR. * Previously served in the U.S. House prior to the 112th Congress. Note: Does not include Republicans Tom Reed (NY-29) and Marlin Stutzman (IN-03) who were elected in November 2010 but took office via special election at that time. Also does not include Democrats Kathy Hochul (NY-26) and Janice Hahn (CA-36) who won special elections in May 2011 and July 2011 respectively. Table compiled by Smart Politics.