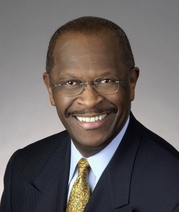 Herman Cain’s overwhelming victory in the Florida straw poll on September 24th has not only resulted in his numbers spiking in a few state and national public opinion surveys, but it has also contributed to a surge in media coverage that no candidate has achieved since Rick Perry entered the race in mid-August.

Coverage of Cain has not simply focused on his gaining ground in the GOP horse race, but has also expanded to capture more of his policy views and statements, including a comment during an interview last week on CNN explaining why Republicans have a problem getting the black vote:

The media’s focus on Cain was also accelerated when non-candidate and FOX News commentator Sarah Palin made a remark, sandwiched in between several complimentary statements about the businessman, that Cain was the media’s “flavor of the week” – a comment that helped ensure he would indeed be so.

And how big of a media footprint did Cain leave last week?

A Smart Politics review of Lexis/Nexis news transcripts from ABC, CBS, CNN, FOX, MSNBC, and NPR finds that Cain was mentioned in as many news broadcasts during the week of September 25th to October 1st following his Florida straw poll victory as the previous five weeks combined – good for third best in the GOP field.

(Note: Lexis/Nexis transcripts cover most news programs on the cable TV networks, but not all morning and early afternoon programming, such as MSNBC).

Cain was interviewed or mentioned in 153 news stories on these six broadcast networks during the seven-day stretch, which was third behind only Rick Perry (190) and Mitt Romney (170) for the most in the Republican field.

Cain’s surge in media attention documented in this report does not include any of the coverage he received at the start of a new week Sunday when the businessman double-dipped on the morning news talk shows with appearances on ABC’s “This Week” and FOX’s “Fox News Sunday.”

Since Perry entered the race seven weeks ago in mid-August, Cain had never cracked the Top 5 most covered announced Republican candidates, coming in sixth for two weeks, seventh in three, and eighth in two other weeks.

Cain had previously eclipsed 75 weekly reports mentioning his name just once since launching a presidential exploratory committee on January 12th. During the week of the Republican National Leadership Conference in mid-June Cain was interviewed or cited in 101 stories.

Cain’s most recently weekly total (153 reports) is virtually identical to the amount of coverage he received during the five weeks prior to his Florida Straw Poll victory (154 reports).

Cain coverage nearly doubled that of Bachmann, who was interviewed or mentioned in 79 stories last week, followed by Ron Paul at 56 stories. Paul had received more media attention than Cain for each of the nine previous consecutive weeks.

Overall, Bachmann has enjoyed triple the coverage of Cain over the last 14 weeks since she formally declared her candidacy on June 27th.

During that period, Bachmann has been interviewed or mentioned in an average of 122 news reports per week compared to just 40 per week for Cain in the six media outlets under analysis.

In fact, Bachmann had also received more coverage than Cain in each of the seven weeks prior to announcing her candidacy dating back to early May, while the former Godfather’s Pizza CEO was languishing in relative obscurity four months into his presidential bid.

The last time the national media gave more coverage to Cain than Bachmann was the week of May 1st.

Since entering the race seven weeks ago, Perry has set the pace in media coverage at an average of 208 stories per week with Romney in second at 148 during that span followed by Bachmann at 118, Paul at 67, Cain at 49, Huntsman at 47, Gingrich at 34, Santorum at 31, Johnson at five, and Roemer at one.

Overall, since Cain launched a presidential exploratory committee on January 12th, he has been interviewed or mentioned in an average of 27 reports per week on these six broadcast outlets.

Denotes number of media reports interviewing or mentioning Herman Cain each week as compiled by a Lexis/Nexis search of transcripts from ABC, CBS, CNN, FOX, MSNBC, and NPR. * Cain announced he was forming a presidential exploratory committee on January 12, 2011. Compiled by Smart Politics.