Despite a recent surge in attention on the New Jersey governor, Palin coverage has outpaced that of Christie for 35 of 39 weeks this year 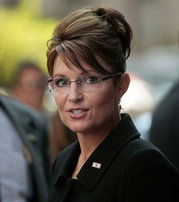 While many Republican voters and party elites may have been clamoring for Chris Christie to jump in the race throughout the year, fellow non-candidate Sarah Palin has nonetheless dominated the New Jersey governor in media exposure consistently in 2011.

Despite frequent waves of speculation and calls for the New Jersey governor to make a 2012 presidential bid, the year in presidential non-candidate news can still pretty much be summed up as ‘All Palin, all the time’ when it comes to media coverage of the most prominent players on the periphery of the Republican nomination scene.

Smart Politics reviewed news reporting from ABC, CBS, CNN, FOX, MSNBC, and NPR via transcripts on Lexis/Nexis and found that even with the latest spike in Christie coverage, Palin has out-dueled the governor by nearly a 3:1 margin in media attention for the year, including 35 of the 39 weeks of 2011 to date.

Overall, Palin was interviewed or mentioned in 2,826 broadcasts across these six news outlets under analysis, compared to just 1,072 reports for Christie through the week ending October 1st.

Christie coverage did double up on another well-known moderate east coast Republican who has played the presidential speculation game in 2011 – former New York City Mayor and 2008 GOP candidate Rudy Giuliani, who was mentioned in just 530 such reports.

But the media’s eye has almost always been focused on Palin from Day 1.

The former Alaska governor has given newscasters more to talk about than Governor Christie in every week of the year save four:

Palin coverage also eclipsed that of Giuliani in every week but one in 2011 thus far (the week of May 1-7, in which Giuliani had a slight 38 to 34 report advantage in broadcast media play).

Palin, of course, is a FOX News commentator and thus occasionally gets scheduled air time – often in Greta Van Susteren’s 10 pm On the Record time slot.

However, even after eliminating all reports interviewing or mentioning Palin on her home network, she still has been mentioned in more than twice the number of reports as Chris Christie – popping up in 2,217 non-FOX broadcasts compared to 1,070 for the New Jersey governor across all six outlets.

Palin eclipsed 100 weekly news reports mentioning her name seven times this year, compared to just one time for Christie (September 25-October 1) and none for Giuliani.

During the weeks of January 9-15 (182 reports) and January 16-22 (151) coverage of Palin soared due in part to criticism she received in the aftermath of the Gabrielle Giffords shooting, for the crosshair targets her PAC had placed on Democratic districts during the 2010 election.

Giuliani’s strongest showing in the broadcast media occurred during Memorial Day weekend (50 reports) and the week before (39) and during (35) the 10th Anniversary of the 9/11 attacks.

Now that Christie has definitively announced he will not be a candidate for the 2012 presidential race one last time, expect coverage of Sarah Palin to once again eclipse that of the New Jersey governor for the rest of the year.

Denotes number of media reports interviewing or mentioning Sarah Palin, Chris Christie, and Rudy Giuliani each week as compiled by a Lexis/Nexis search of transcripts from ABC, CBS, CNN, FOX, MSNBC, and NPR. Note: not all morning and early afternoon transcripts are compiled by Lexis/Nexis for some broadcast networks (e.g. MSNBC). Compiled by Smart Politics.