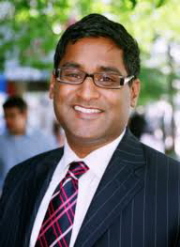 National Review Senior Editor Ramesh Ponnuru will speak at the University of Minnesota’s Humphrey School of Public Affairs Thursday afternoon in an event discussing the future of conservatism.

The event will be moderated by Larry Jacobs, Director of the Humphrey School’s Center for the Study of Politics and Governance.

From the Center’s press release:

“William F. Buckley Jr. founded the National Review and helped to build a tradition of conservatism that combined advocacy of liberty with intelligence and common sense. This tradition of practical conservatism is vital today as America seeks to renew economic growth and regain its international stature. Ramesh Ponnuru, an editor of National Review and leading conservative voice today, discusses how conservatism can revitalize America and whether today’s Republican Party is up to the challenge. Professor Larry Jacobs will moderate the conversation.

Ramesh Ponnuru is a senior editor for National Review. Ponnuru grew up in Kansas City and graduated summa cum laude from Princeton’s history department. Ponnuru has published articles in numerous newspapers including the New York Times, the Washington Post, the Wall Street Journal, the Financial Times, Newsday, and the New York Post. He has also written for First Things, Policy Review, The Weekly Standard, The New Republic, Reason, and other publications. He is the author of the monograph The Mystery of Japanese Growth (American Enterprise Institute/Centre for Policy Studies). He has been a fellow at the Institute of Economic Affairs in London and a media fellow at Stanford University’s Hoover Institution. He has appeared on CNN’s Inside Politics, NBC’s The McLaughlin Group, MSNBC’s Buchanan & Press and Donahue, CNBC’s Kudlow & Cramer, PBS’s The NewsHour with Jim Lehrer, CSPAN’s Washington Journal, Comedy Central’s Politically Incorrect, Fox News, and NPR’s Morning Edition.”