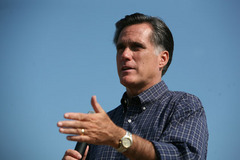 If Tuesday night’s Republican debate was a boxing match, it certainly featured plenty of cheap shots after the (silent) whistle had blown.

And CNN referee Anderson Cooper did little to intervene.

A Smart Politics analysis of the last four presidential debates finds that the CNN GOP debate in Nevada featured the largest ratio of candidate-to-moderator speaking time by a wide margin.

That ratio is significantly higher than the three previous debates:

· At the Bloomberg / Washington Post New Hampshire debate last week, candidates spoke for 72 minutes and 49 seconds with the three moderators posting 18 minutes and 4 seconds, for a 4.0 to 1 ratio.

· At the GOP’s first debate in Florida, also sponsored by CNN, candidates spoke for 69 minutes and 4 seconds with the moderators chiming in for 17 minutes and 38 seconds for a 3.9 to 1 ratio.

· And at the second Florida debate moderated by FOX News, candidates spoke for just 64 minutes and 35 seconds with the moderators speaking for 26 minutes and 15 seconds, for just a 2.5 to 1 ratio.

On only six occasions in Nevada on Tuesday evening did Cooper deliver remarks or questions totaling at least 20 seconds.

By contrast, the FOX News moderators Brett Baier, Chris Wallace, and Megyn Kelly (and Shannon Bream handling the ‘interactive’ component of the debate) tallied a whopping 30 instances of speaking for at least 20 seconds at a time.

Meanwhile, Cooper posed questions or spoke for less than 10 seconds on 85 occasions compared to just 50 for the FOX News crew last month.

And what was the result of this extra freedom the Republican candidates enjoyed on the stage Tuesday evening?

The laissez-faire approach to moderating the debate taken by Cooper meant that on several occasions interruptions became so frequent between candidates that the crosstalk lasted for 10 or 20 seconds, such as during Mitt Romney and Rick Perry’s discussion about illegal immigration, Perry and Rick Santorum’s squabble over Perry’s support of TARP, and Santorum and Romney’s argument over health care.

The Romney-Perry spat got to the point were Perry was talking as much in Romney’s rebuttal time as the former Massachusetts governor, at which point Romney pleaded, “Anderson?” but the CNN anchor did not intervene.

The environment also devolved into playground tactics such that – during the Santorum-Romney argument – the former Pennsylvania U.S. Senator interrupted Romney for an extended period and then, as a result, tried to convince Cooper that the governor’s “time was up.”

Romney perhaps took the playground environment a bit too far when he played “tag” with Perry during their headline-making moment.

The net effect of Cooper’s hands-off approach was alternately exciting and excruciating to watch, but gave the media plenty of fodder for its juicy headlines.