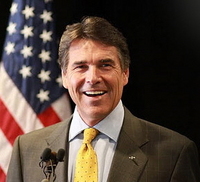 With Rick Perry reversing course on his recent suggestion that he might skip some of the upcoming Republican presidential debates, viewers can once again count on getting a healthy dose of anecdotes about politics in the Lone Star State.

Although Mitt Romney may be the unofficial frontrunner in the GOP field, and has by far received the most speaking time, it is Texas, not Massachusetts, that is the most frequently mentioned state in the primetime debates.

And Rick Perry is leading the charge.

A Smart Politics content analysis of the five Republican debates that have been conducted since Rick Perry took the stage finds that Texas accounts for 125 of the 231 references to the nation’s 50 states, or 54.1 percent, with Perry accounting for 83 of them.

Massachusetts is the next most mentioned state with 38 references (16.5 percent), followed by Nevada and Utah with 13 (5.6 percent), and Pennsylvania with 10 (4.3 percent).

It should come as little surprise that several of the most referenced states are home to one or more of the candidates: Texas at #1 (Perry and Ron Paul), Massachusetts at #2 (Romney), Utah tied for #3 (Jon Huntsman), and Pennsylvania at #5 (Rick Santorum).

However, Perry has mentioned Texas nearly 40 times more frequently (83) than all other candidates referring to their home state combined (46).

Romney has referred to Massachusetts just 19 times, with Jon Huntsman naming Utah 11 times, Rick Santorum mentioning Pennsylvania eight times, Ron Paul referring to Texas seven times, and Gary Johnson mentioning his home state of New Mexico once in the only debate in which he was allowed to participate.

Meanwhile, Michele Bachmann has not mentioned her home state of Minnesota at all during these last five debates, and neither have Herman Cain and Newt Gingrich with respect to their home state of Georgia.

One of the many critiques of Perry’s debate performances to date is that he has not successfully translated before the cameras his extensive executive experience as governor of Texas into a meaningful national campaign blueprint.

But that hasn’t stopped the governor from dipping into the Texas well time and time again: referring to his home state 17 times during his debut at the Reagan Library in California, 29 times and 14 times at the next two debates in Florida, with 15 more references in New Hampshire, and eight additional mentions in Nevada.

Perry might defend his rhetorical obsession with the Lone Star State by pointing to the need to highlight his lengthy gubernatorial record there as well as to defend it from the many attacks he has endured from other candidates on issues such as illegal immigration and requiring HPV vaccinations.

However, all other Republican presidential candidates have mentioned Texas about half the number of times in the last five debates combined (42 instances) as Perry (83).

Moreover, the debate transcripts suggest Perry, who a Smart Politics study has already crowned the King of Clichés for his penchant to add extraneous words and phrases to his answers, may be mentioning Texas so frequently more as a verbal tic – to buy him more time as he struggles to formulate his answers – and less as a necessary reference to defend his gubernatorial record.

“The state of Texas has a very thoughtful, a very clear process in place of which — when someone commits the most heinous of crimes against our citizens, they get a fair hearing, they go through an appellate process, they go up to the Supreme Court of the United States, if that’s required. But in the state of Texas, if you come into our state and you kill one of our children, you kill a police officer, you’re involved with another crime and you kill one of our citizens, you will face the ultimate justice in the state of Texas, and that is, you will be executed.” – Rick Perry (California, September 7, 2011)

“Look, I think we made decisions in Texas. We put a $3 billion effort in to find the cure for cancer. There are a lot of different cancers out there. Texas, I think, day in and day out, is a place that protects life. I passed parental notification piece of legislation. I’ve been the most pro-life governor in the state of Texas. And what we were all about was trying to save young people’s lives in Texas.” – Rick Perry (Florida, September 12, 2011)

“But the fact of the matter is, you look at the state of Texas and see what we’ve done there from the standpoint of lowering that tax burden, the regulatory climate in the state of Texas. We’ve taken those types of regulation off the throat of small business operators. People understand that the state of Texas, during the last decade, something special happened there.” – Rick Perry (Florida, September 22, 2011)

In fact, in 44 of the 83 instances in which Perry mentions his home state, the governor refers not simply to “Texas” but the “state of Texas” – seemingly buying Perry an extra beat as he thinks ahead to construct his answer.

By contrast, Romney refers to the “state of Massachusetts” just once across the five debates.

Among the other most mentioned states are those that have hosted these GOP presidential debates, with Nevada tied for #3, New Hampshire at #6, California tied for #7, Florida tied for #9, and Iowa tied for #14.

Of the 13 references to Nevada, 12 of these took place during the October 18th CNN debate in Las Vegas, and only one elsewhere.

Likewise, five of the seven mentions of New Hampshire occurred at the debate held at Dartmouth College.

But not all states are getting the attention of the candidates on this national stage.

More than two-thirds of the 50 U.S. states have not been mentioned once by the candidates during the last five debates.

The next Republican debate is scheduled for November 9th at Oakland University in Rochester, Michigan. It will be moderated by CNBC.