David Williams now holds two of the 10 worst showings by a Republican gubernatorial, U.S. Senate, or presidential nominee in Kentucky since 1871 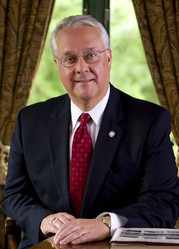 There was little surprise Tuesday when Kentucky gubernatorial candidate David Williams turned in one of the most dismal performances for the Republican Party in state history.

According to unofficial results published at the Kentucky State Board of Elections, with 100 percent of the precincts reporting Williams received only 35.4 percent of the vote in his loss to one-term Democratic incumbent Steve Beshear.

That marks the fourth worst showing for a Republican gubernatorial candidate across 37 election cycles dating back 140 years to the 1870s – the first full decade in which a Republican nominee appeared on the ballot in all such contests in the Bluegrass State.

The lowest tally notched by a Republican gubernatorial nominee in Kentucky since 1870 was turned in by Peppy Martin in 1999 when she recorded just 22.2 percent of the vote in her failed bid to defeat Democratic incumbent Paul Patton.

The 35.4 percent recorded by Williams Tuesday is well below the 43.7 percent of the vote Republican nominees have averaged in Kentucky during this 140-year span.

Interestingly, as Republicans have made greater and greater inroads in the south in recent decades, the Kentucky GOP has turned in several of its worst ever showings in gubernatorial races.

David Williams now holds the distinction of owning two of the 10 worst performances for a Republican on the Kentucky ballot out of the 112 elections for governor, U.S. Senate, or president since the 1870s.

In 1992, Williams received just 35.8 percent of the vote in a U.S. Senate race against Democratic incumbent Wendell Ford, which is the 3rd lowest mark ever notched by a GOP U.S. Senate nominee in state history.

The strong performance by independent candidate Gatewood Galbraith on Tuesday (winning 9 percent of the vote) undoubtedly depressed the vote tally a few points for both Williams and Governor Beshear.

Top 10 Worst Performances by a Republican Presidential, Gubernatorial, or U.S. Senate Candidate in Kentucky Since the 1870s